Craigmore Farming achieved an indicative net return of 13.5% in the year 2012

We currently estimate that calendar year 2012 net returns to investors (in NZ$) from the Craigmore Farming Partnership will be in the range of 13 to 14% when we release quarterly performance estimates in early February.

Significant contributions to the 2012 returns were generated through a re-rating of farm valuations, as some distressed farms that Craigmore acquired are now significantly out-performing the previous owners’ management. There was also a lift in the value of our Fonterra shares, after these were listed on the NZ stock exchange.

The market in New Zealand farmland has been flat since late 2009 – down 30% from its bull market peak in late 2008 (see graph below).  This flat period continued in 2012. Instead of being lifted by the overall market the increases in Craigmore’s 2012 farm values were driven by local factors, particularly Craigmore’s farm purchasing strategy; our team’s experience in improving operational management of acquired farms; and the extra returns we generated through development (land-use change). We discuss these operational strategies in more detail, below. 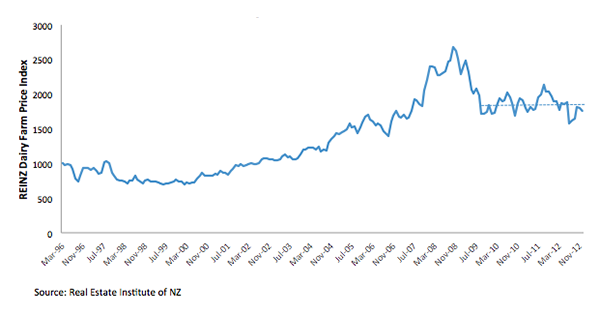 It is a widespread belief among farmers that “nobody should ever sell land”. Much land, such as my family’s own farm, has been held for five or six generations. One of Craigmore’s investors has farmed the same land in northern Germany for 700 years.

It follows that many farms that are sold are normally quite “tired”, as the previous owners will often have lost enthusiasm or be financially stretched. Capital assets such as soil fertility, pastures, irrigation, machinery, staff-housing, stock fences and livestock genetics will often be under-invested, and not producing optimally.

It further follows that newly acquired farms will normally yield below their potential performance and lag behind neighbouring farms over the short term. However as time goes on, staff and livestock get familiar with the property, and investment in soils, pastures, livestock genetics and equipment allow the farms to trend toward optimal productivity from years three to five.

These “turnarounds” of under-performing farms are a key element of Craigmore’s strategy. To illustrate, the milk production graph set out below shows the improved production at Craigmore’s Pahau dairy farm under Craigmore Farming. This year’s milk production (blue), being Craigmore’s first full season in control, is currently tracking 15% ahead of production in 2011/12 (red). 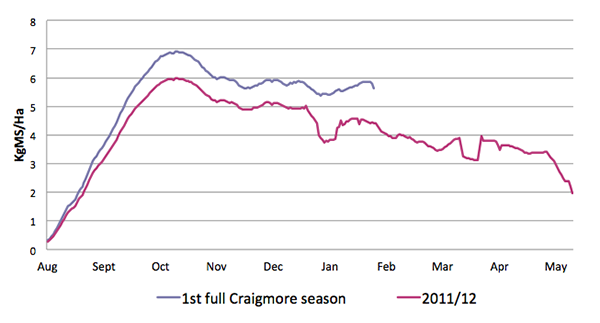 Last year, Craigmore Farming Partnership converted our Wairepo property from a grazing/arable farming system to pastoral dairy. On that land we have seen annual revenues increase from $3,000 per hectare to a current rate of $9,000 per hectare. Meanwhile the capital employed by the property approximately doubled following investments in cows, irrigation, pastures, a dairy shed, staff housing, effluent systems, fences, lanes and Fonterra shares. Wairepo is now a state-of-the-art fully irrigated pastoral dairy farm. Despite this being the first year in operation as a dairy farm this business (red) is already approaching the district average production (blue). This is a great achievement in itself and very promising for the future. Such developments always start out in the first year after conversion well below their true productive potential. Soils, pastures, livestock and management systems take time to build toward peak performance. In time we expect Wairepo to set production and profitability records within our business.

The NZ Farmland Investment Opportunity in 2013 and 2014

Currently $100 mm of farming assets are owned or under contract to the Craigmore Farming Partnership. Via further development investment alone, without the purchase of additional land, the portfolio can be grown to approximately NZ$150 mm of assets.

We believe 2013 and 2014 will be a favourable time to execute on a pipeline of opportunities in carefully selected classes of NZ farmland, to reach the target fund size of NZ$250 mm Committed Capital.

Toward this, the Craigmore Farming Partnership has purchased the land for two more dairy conversions which will, once again, increase the revenue yield of the purchased land by at least a factor of three. Further, we have very recently secured contracts to purchase some large areas of irrigable land for future development.  This land will be converted from dry-land to irrigated land used primarily for grazing of young and non-producing dairy cattle (a revenue multiplier of four times). It may subsequently, subject to resource consents and Craigmore’s Sustainability Principles, be further converted into dairy land for a further development gain.

Commodity Prices
Recent commodity price peaks, current climatic fluctuations (e.g. US drought) and macro-trends (e.g. Chinese protein consumption) are supportive of increased agricultural demand.  While variable, farm commodity prices and outlooks are favourable, with each of the dairy, sheep & beef and horticultural & arable farming sectors having at least one very good trading year in the past two years: Dairy in 2010/11 with the Fonterra payout close to NZ$8.00 per kg of milk solids, sheep  in 2011/12 with 17.5 kg lambs selling at up to NZ$140/head. Meanwhile milling wheat has been over $400 per tonne since 2008. 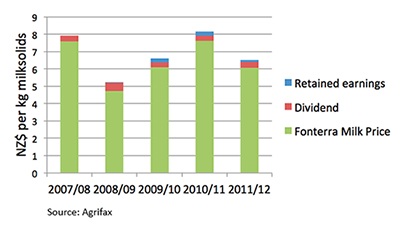 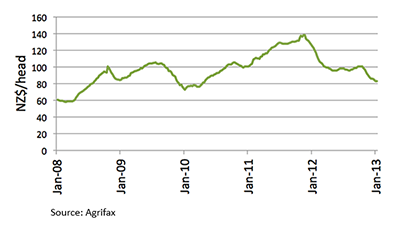 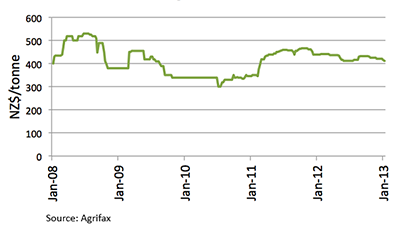 NZD Interest Rates
In addition to commodity prices, interest rates have also been supportive for investment in farmland, with Craigmore paying 5.5% on short term borrowing, down from 10% only five years ago.

Improving Farmland Fundamentals Continue to be Off-set by Forces of De-leveraging
However, despite these emerging positive fundamentals, the market in NZ land has, as already noted, continued to “flat-line” for the past three years (see more detailed graph, below). Positive fundamentals have not been sufficient to off-set the over-hang of $46 bn of rural debt. As such, banks are now far more careful than they were in 2007 with respect to leverage limits for farmer debt.

Despite a few of the most obvious distressed opportunities being already recapitalised, a very significant backlog of over-indebted farmers remains. Some will try to farm their way out of their debts, however, many  will sell their farms (including some significant farming portfolios which we are monitoring).   Thus, although we will continue to see some spikes in land prices in some areas (normally on low volumes with, for example, neighbours or foreign retail investors over-paying for trophy farms) we consider that the investment opportunity in NZ agriculture remains very favourable. Provided a carefully thought-out strategy is employed.   We are eager to seize the opportunity that exists to employ Craigmore’s strategy now, rather than waiting later until the second half of 2013 or 2014, at which time it is possible that some land acquisition windows may be tightening up.