The Formation of a Coalition Government in New Zealand

I have written extensively in previous Commentaries about the rise of populism in the US and UK but I failed to predict the latest tilt towards interventionism in New Zealand. Years of liberal policies and sensible economics made me complacent.

The new government of New Zealand is the effect of proportional representation in parliamentary elections, in which political parties that gain over 5% of votes can have a large influence on policy outcomes, as their input is needed to resolve a hung parliament. As of last Thursday, we have seen an alliance of the parties which appeared to lose the election, NZ First (which gained 7.2% in the recent election), the Greens (6.3%) and Labour (36.9%) reaching agreement to form a government.

Our new government has signalled that it would be more protectionist and interventionist than the previous administration. For instance, signals have been sent that social spending and minimum wages will increase, inward migration will be reduced by 20 to 30%, access of international capital to New Zealand residential property will be curtailed, and further limits placed on purchase of farmland. A number of other environmental measures have been broadly announced, most of which place New Zealand on a trajectory to ensure that the country meets growing consumer and voter expectations of sustainable production.

The trigger for this swathe of more interventionist policy has been rapidly escalating Auckland house prices over the past eight years. For most of the past century, home ownership rates in New Zealand have been exceptionally high, and a marker of the country’s egalitarian society. Immigration has been partly blamed for “locking out” first home buyers from the market. NZ First has been particularly focused on addressing this issue. 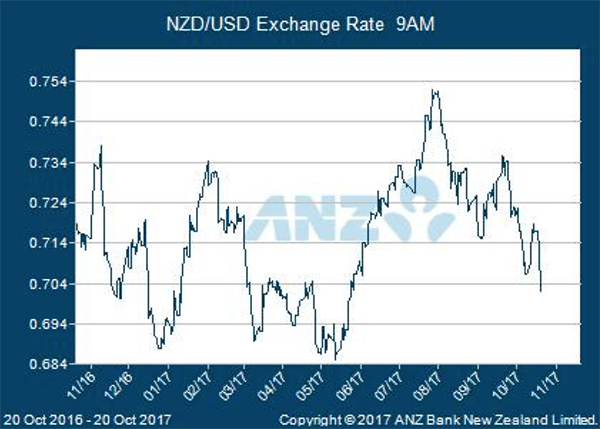 As can be seen, the NZ currency began falling as soon as the polls started showing the likelihood of a hung parliament, with the anticipated out-sized influence of NZ First. This knocked the currency off a steady strengthening – associated with improving commodity prices.

Against e.g. the GBP, the NZD has performed very well for the past 15 years, as NZ “found its feet” as a country, after a tough restructuring in the 1990‘s. And, of course, as Britain’s formerly strong economy was knocked by the shock to its largest industry in 2009, and then by the uncertainty to its future trade status in the referendum of June 2016. 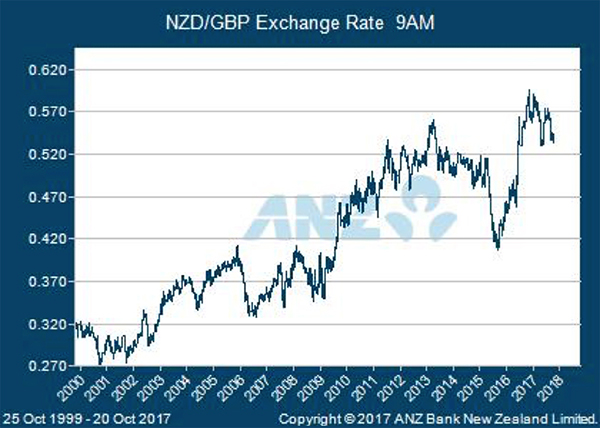 However, it is important not to over-react.  NZ has a fundamentally sound economic policy environment e.g. it never implemented Quantitative Easing, runs public sector budget surpluses, and has net debt of only 23% of GDP (vs 88% in the UK).  Also, the spending plans of the new government have been tested by independent economists, as per the normal New Zealand election process, and would not be expected to put the government back into deficit.  There is no reason to believe, despite restrictions on immigration and offshore capital into residential housing, that NZ will throw this policy prudence away.  Keep in mind that Switzerland has severe restrictions on immigration and some restrictions on property purchase.  However, this does not make Switzerland a basket case economy!

What does this mean for Craigmore and our investors?

For our existing farming operations things are business as usual, with the negative and positive impact of policies largely expected to offset each other:

In terms of growth, there are likely to be additional investment restrictions announced very shortly for offshore ownership of farmland. Craigmore remains the most robust avenue for offshore parties to invest in NZ farm and forest land because:

Craigmore’s risk management of what was already a steady tightening of the standards imposed by the government on foreign capital has led us to invest significantly in environmental, data and productivity planning and systems. These, plus our status as an active, NZ-owned manager of farming and forestry projects, make us confident there will continue to be a compelling on-going role for Craigmore and our international partners.

Craigmore also sees other opportunities outside of buying and operating the land. As mentioned above, our Map of Agriculture business has made a significant investment in technology to increase value from farm data. Over the past 18 months, Map of Agriculture has grown annual revenues from £1.1m to what is now approaching £3m across six countries. It recently launched a second fundraising round to power growth from those levels into the £5 to 10 m range over the next two years.

Warm regards and looking forward to continuing to work hard to invest sustainably in first class land use.