What are the regional effects of climate change on farmland/crop yields? 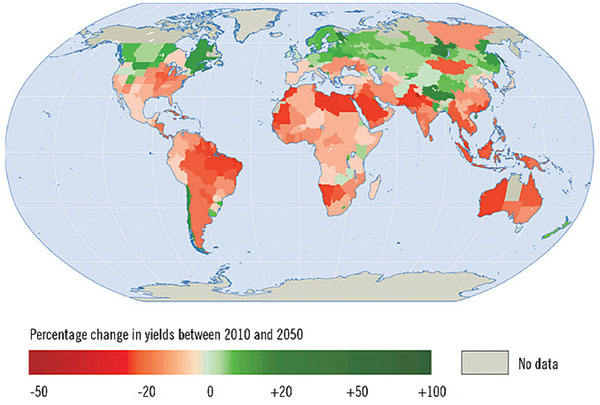 These changes may be large. One study (Climate Change Induced Transformations, D Leclère, 2014) predicts palm oil yields will fall by -24 °C and barley yields will increase by 17°C.

Warm country agriculture is likely to be a net loser; cool regions may benefit

As can be seen in the next graph cooler areas such as New Zealand and Canada have seen yields grow in recent years. Meanwhile wheat yields in more tropical regions have not performed as well.

Of course, yield changes are never solely environmentally determined. And anyway, the observed period saw only gradual climate change. Yields are also driven by changes in use of technology and husbandry. However, farms are constrained within the “envelope” of what the environment will allow. So a gradually warming climate was likely a contributing factor to these yield changes.

What about Australia, New Zealand and South Africa?

In the southern hemisphere, the grain growing regions of Australia and South Africa have experienced tough droughts in recent years. These are expected to become more frequent.

New Zealand is a wet, yet sunny and windy country. It has a maritime climate i.e. temperatures moderated by the sea. Yields in the already warm North Island should be broadly neutral. The South should generate better yields as temperatures rise.

General predictions about yield changes will not always be realised “on the ground”. One reason is extreme weather events (droughts, heatwaves and storms) are increasing and may act to significantly lower crop yields. E.g. a joint US-UK task force estimates that what were once 100-year events may now occur every 30 years. GFS extreme-weather-resilience-global-food-system PDF 2.9mb

Climate change likely contributed to droughts and high temperatures across much of the northern hemisphere grain belt (in Russia, the US and Europe) in 2012 and 2018. Such events are becoming more frequent. As a result, unless farms adopt technologies to offset such variability (such as irrigation) or have soils that can withstand this variability, even cooler regions may not be able to realise the benefits.

Contrary-wise, even in warmer regions, as illustrated by e.g. Australian growers using no-till techniques to make better use of soil moisture, technology and husbandry may preserve or even increase yields – even in regions facing excessive warming or drought.

Another reason predicted yields may not be realised is that these are modelled in perfect conditions. Many, e.g. African crops, are currently yielding far lower than potential. Some may be able to increase yields even if theoretic yield ceilings are falling. Similarly, it is not just drought that may act to restrict forecast yield improvements in e.g. northern Europe. Warmer temperatures may bring increased disease and pest burdens.

Environmental legislation may also impact yields. E.g. restrictions on fertiliser use to prevent nitrate and/or phosphate water pollution may be strengthened. This will reduce yield potential with current technology. However, offsetting this, technologies such as precision farming, IoT and improved genetics may enable maintenance or improvement of yields (even from lower inputs).

A further reason for variances from global predictions is, despite theoretically increasing suitability, areas with weak soils (the Canadian Shield) or poor transport links (Siberia) may also struggle to deliver profitable farming systems.

What about price responses?

Farm productivity gains over many years mean farm produce is priced at so low that we receive only 0.8 °C of developed country GDP. However, when periods of production shortfall occur, as happened in grain markets in 2012 and 2018, a small reduction in global supply of a commodity e.g. a 3°C shortfall can lead to a far greater increase in farm prices e.g. 50°C as detailed in this commentary.

This suggests that if climate change lowers global crop yields we are likely to see increases in average farm incomes. Suitable farmland is in that sense a “call option” on climate change.

The above suggests the prudent strategy is to own farms in cooler regions. And address rising climatic variability by owning “better than average” farms. As I have written before, quality farms are the best farms in the scenarios we face. “Cheapness” is seldom a good guide to the purchase of farmland. Less productive and less resilient farms are often cheap for a reason.

Craigmore’s strategy is centred around location, production variability (reliability) soil type and access to water. Access to water is ‘good’, however access to reliable irrigation (or low variability natural rainfall) is ‘ideal’. We match land uses to ‘optimal production location and soil/topography’. We often research investment in outlier areas. However, it is remarkable how often our capital placements converge back to our optimal regions. So that we can minimise variability.

In future I hope to outline a more formal model for farmland investment decisions under (climatic) uncertainty.

As always please send comments or questions. Two readers kindly accepted my challenge to dispute my “In Praise of Trees” argument for widespread tree establishment to sequester greenhouse gases. One argued that climate change is not proven i.e. remains uncertain. The other believes decreasing solar activity will off-set greenhouse effects. It would of course be great if either of was correct. If because climate change is a statistical inference and not proven in the manner of 1+1=2 (so it’s impacts uncertain), that we could responsibly ignore it. Or, alternately, if a helpfully coincidental dimming of the sun would off-set our activities. Unfortunately I don’t think either argument absolves our duty to look after this beautiful planet. However thank you for sending them in.