US dollar food commodity prices have risen 40% since the onset of Covid-19 in March 2020. This sharp price jump, shown in the graph below, has reversed a painful period of farm produce deflation during the previous seven years. In fact, farm gate prices have returned almost to their nominal and real levels from the food commodity spike of 2009-2013.

This Commentary analyses inflation globally and looks at the global dairy industry as a case study of how farm gate prices may evolve.

Prices of many goods and services are currently rising; US annual inflation is running over 6%, New Zealand at 4.9%. Inflation is being driven by shortages of:

Some of the causes of these supply shortages should in time be resolved (e.g. as society learns to live with Covid-19). A mainstream “inflation is transitory” school of economists have been arguing along these lines that supply shocks should heal themselves. They argue that, as Covid recedes, entrepreneurs, including farmers, will be motivated by higher prices to invest to supply more goods and services and resolve logistics bottlenecks. This will bring prices down or at least stop them rising further.

These arguments are coherent, all other things being equal. They would surely have been proven right if we were still in the globalised, well-financed yet fiscally disciplined world of 2000 to 2019. Unemployment and deflation followed the boom of the 1920s and the expansion ending in 2008.

However, I would suggest that all other things are not equal – and that as a result of likely further policy responses – fiscal largess – the 2022 global economy is unlikely to resemble that of 1929 or 2009. It may be more like that of 1974.

B. The spread of populism

Politicians and policy makers in the US, UK, China and elsewhere were stung by working class reactions to the inequities of the past decade. This contributed to the 2016 Brexit vote, to President Trump and to unrest in China. As a result, political leaders have got over their desire to focus government support solely on asset markets, which led to widening inequality. They are now re-focusing policies on support on the common man or woman. i.e. on “populism”.

Hence many countries are seeking to restrict cross border transfers of labour (border restrictions) and of labour-intensive goods (tariffs), as well as to run unfunded fiscal deficits to pay for popular political programs. In this context fiscal deficit spending can be viewed as a “populism index”. Thus, in the below graph, the US government boosted expenditures to 192% of receipts to address Covid-19, vs. the boost to 167% of tax receipts to address the 2008-9 credit crisis.

C. How is aggregate demand likely to evolve in economies?

My source for such a model is my friend and co-founder of various businesses Carlos Pepe Rodriguez who points out:

Government Budget Balances as a Percentage of GDP

Source: Many thanks to Simon Ogus and his team for this graph

Carlos’ key point is that a larger proportion of money printing is now finding its way to ordinary people, not just owners of financial assets.

As we discovered amidst the political upheavals of 2016, many of these ordinary people do not feel prosperous. In fact, many feel frustrated. After years of falling real wages, now that the labour market has tightened (see previous section on supply shocks) and wages are rising, ordinary people are eager to share in more of the good things of life. This propensity to spend their additional income has led to increased consumption. A graph of US goods vs services prices (below) shows this demand has found its way into physical goods for which there was pent up demand. Services have a lower income elasticity of demand. Rich people buy more services, ordinary people, more physical goods.

Change in Consumer Prices From a Year Earlier 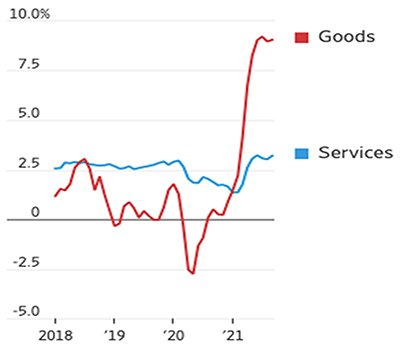 How might Carlos’ model help us think about future pathways of demand? My suggested answer to this relates to my No Constituency for Sound Money commentary, written also in a quarantine hotel in Christchurch in November 2020. As inflation unfolds and reduces ordinary people’s spending power in coming years, President Biden and PM Johnson and Brussels and Paramount Leader Xi will face a choice. They can begin to raise taxes and cut spending to reduce budget deficits – as did Herbert Hoover in his 1929 orthodoxy – a time when many really did believe in sound money. This would reduce aggregate demand. Alternatively, these leaders can continue to support key groups of constituents with funding (healthcare workers, green economy workers). And meet the gap with unfunded government spending.

Given the swing toward populist politics, the lack of constituencies for sound money, I expect these leaders to follow the second course. To continue to support aggregate demand via direct support of the incomes of ordinary people. In fact, for the first time for 40 years, it seems to me possible that wages, salaries, farm produce and energy prices might “catch up” some of the ground they have lost to asset prices. Indeed, this is already happening, the prices of many assets (e.g. bonds) are already falling in real terms, as the prices of goods and services rise.

Steady year on year increases in global demand for dairy produce, amidst less rapid supply increases (discussed further below) have increased global US$ dairy prices by 36% since Covid broke out in March 2020.
Cheese and yoghurt are major, low carbon intensity contributors to vegetarian diets. Global demand for these key food ingredients, easily prepared at home, has been growing steadily, globally (see below).1

90% of global dairy production is grain fed; New Zealand and Ireland’s grass-fed dairy industries are the exceptions to this. This means for most producers around the world the main cost of dairy production is the cost of resources such as corn (prices up 56% in the past 18 months) and soy (up 44%).2 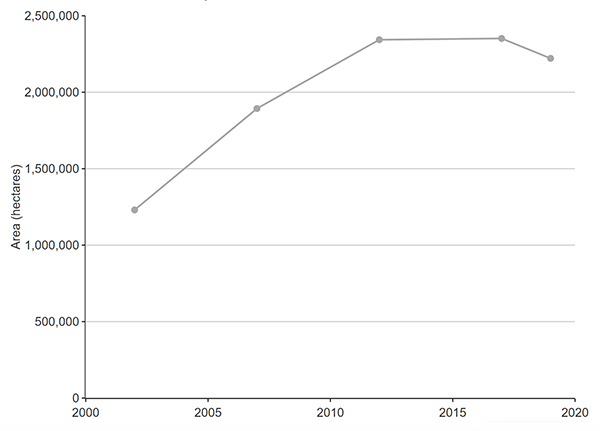 This tightness in agricultural supply is a structural change from previous quite rapid year-on-year production growth. Between 2002 and 2021, New Zealand, for example, doubled the area of land used for dairy farms, from a little over 1m hectares to over 2m hectares – see graph above. As the world’s largest dairy exporter (about 22% of cross-border dairy trade comes from NZ) former rapid growth of the New Zealand dairy industry, along with a brief surge in European production in 2014/153 acted to “keep a lid” on global dairy prices.

This expansion has now ceased. Craigmore does not expect a return to the over-supply and low prices of 2014 -2016. Indeed, net land use change into dairy is now negative in New Zealand – see the graph above. The drivers are environmental restrictions on expansion of dairy and land use change – dairy farms being converted into more intensive land uses, like orchards and vineyards. As a result, NZ has now reached “peak cow”. This means milk production is now likely only to increase through efficiency improvements – not through large-scale land use change. Fonterra’s own modelling suggests that it will receive less milk from farmers, year on year in future, rather than more milk, as the national milk pool remains static at best, or more likely falls.

Other dairy exporting regions, especially Europe, are facing similar “peak cow” regulations, while others, like Australia, have seen significant reductions in milk production in the face of climatic variability.

As you have gathered, I expect ongoing inflation in prices of many goods driven by supply disruptions and on-going demand stimulation. This price inflation is likely to be enabled by a lack of political desire for orthodox balancing of monetary and fiscal management. This may turn out to be particularly the case in those food commodities, such as dairy and many horticultural crops where growth in supply is no longer keeping pace with demand.

I’d be grateful for readers’ comments on this analysis. I will summarise your responses in my next Craigmore Commentary, which will explore how the price of farm, orchard and forest land may evolve as those industries’ economics change.

For those who are interested in Craigmore’s land operations, we have just completed another virtual field trip. If you’d like an insight into Craigmore’s New Zealand farms and forests and the people who run them, the field trip can be found on the Craigmore website.

Craigmore has investment opportunities open in each of Pastoral Dairy Farming, Permanent Crop Horticulture and Forestry.

Looking forward to hearing from you.

1. While some investors note the environmental footprint of dairy production, NZ’s dairy industry is one of the most greenhouse gas efficient in the world, and Craigmore has committed to managing the down the greenhouse gas intensity of our farms – including an independently verified net-zero dairy farm by 2035 established in partnership with like-minded entities.
NZ pastoral dairy farming will soon be only about 30% of Craigmore’s NZ managed land portfolios (themselves now approaching NZ$ 1 bn). Craigmore has expanded operations into horticultural and forestry in recent years.
2. tradingeconomics.com
3. NZ production increased 8% in 2014, as did Irish production.