In Praise of Trees

A fund to solve climate change

Down here in New Zealand, where we will be until after Christmas, a number of things are changing: 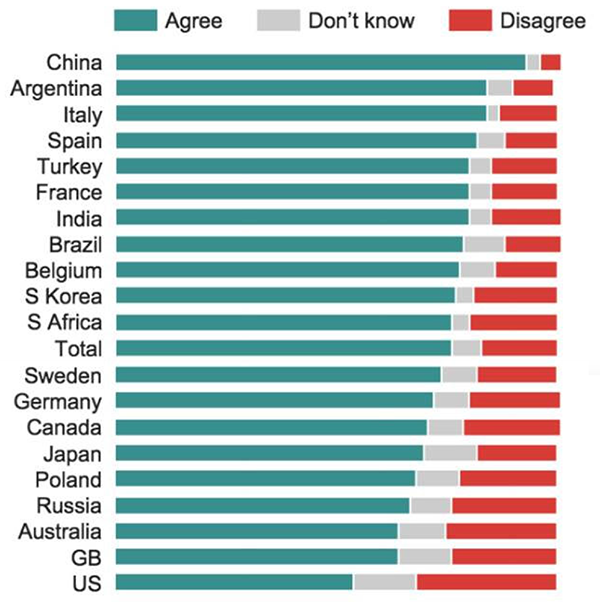 Although climate change denial is now receding in NZ, the belief systems taking its place are striking. To be fair many are wondering how we must act to avert catastrophe. And this is being reflected in NZ’s political process. However I have been struck that more than one of my friends, in a few short years, have gone from being CC deniers to fatalistic predictors of the imminent end of the world! I have now had two or three explain to me, quite seriously, there is no point in doing anything about climate change. We are incapable of concerted action. We are just a speck on the face of the universe, we don’t really matter, etc.

Leaving aside the psychology of these shifts in belief (don’t psychologists say that, when we hear of the death of a loved one we first deny it, then become angry, then become passively depressed, and only then come out of the process and begin to take control of our lives again?), are these doomsayers correct to be nihilistic? Surely the success of humanity has been our ability to collaborate in the face of challenges, rather than to passively yield to them?

Despite the immense size of the planet, some 12,000 km in diameter, the vast majority of the atmosphere is concentrated in a layer only 12 km thick. A tiny but life-supporting film coating a large ball of rock.

CO2 itself, the star performer in this show, in turn makes up a very, very small proportion of the atmosphere. It makes up only 400 parts per million.

Unfortunately, as has been well known to scientists for over 100 years, CO2, whether in a bell jar or free in the atmosphere, has a disproportionate impact on retention of heat. 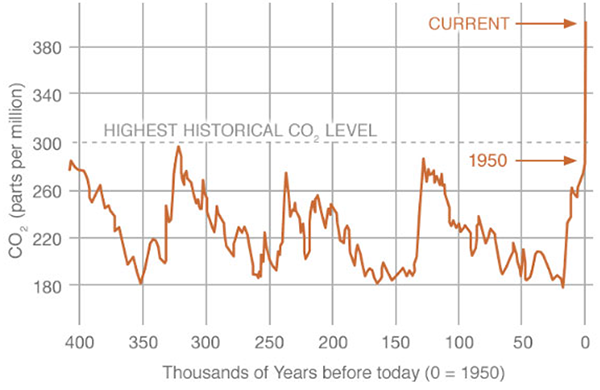 This change* is the main factor in increases in atmospheric, surface and oceanic temperatures of our planet now underway.

One approximate** way to think about CO2 is as a blanket around Earth that was 3.4 metres thick in 1850. It has increased to be 4.8 metres thick at the present day. And will almost certainly grow to around 6m by 2050.

Just like putting more blankets onto a bed makes a sleeping person warmer, this change in the quantity of greenhouse gases, and associated complex but now well understood secondary effects on other natural cycles, is now likely to lift equilibrium temperatures by 1.5 to 2 degrees Celsius from pre-industrial levels.

*along with increases in concentrations of nitrous oxide, water vapour, methane and other greenhouse gases,
**an analogy – it cannot actually be “4.8 metres thick” due to the diffuse nature of gasses

Can we stop the change at an increase of 1.5 to 2 degrees?

Decisions already taken mean that a rise in average temperatures of 1.5 to 2 degrees from pre-industrial levels is now unavoidable. The chart below estimates some of these possible temperature changes. 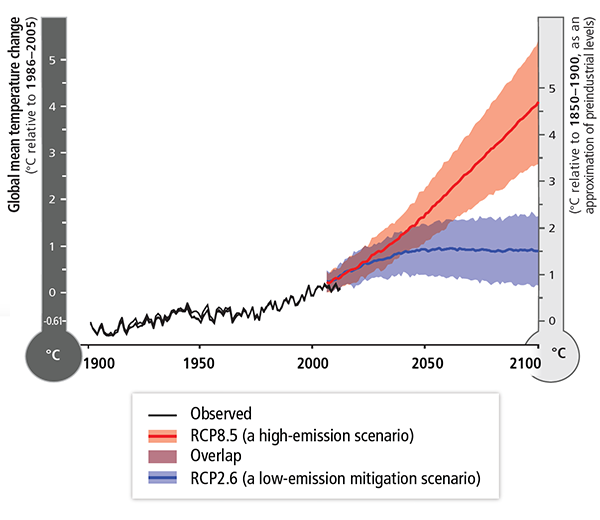 How might we find a way to stop that change right there? To get our planet onto the more stable equilibrium pathway shown as the lower pathway in the above graph?

Or do we just do nothing and allow what my more-gloomy friends are now predicting? That self-reinforcing Climate Change melts the ice caps and permafrost, with temperatures continuing to rocket? Potentially boiling the oceans and destroying the present patterns of life on earth, including that of most species – not least homo sapiens?

There follows an outline plan for mitigating a reasonable proportion of mankind’s excess generation of greenhouse gases. I set it out to give my more overwhelmed friends some hope. Human beings are endlessly creative. Entrepreneurs and societies, if given the right incentives and leadership, can solve challenging and systemic problems. We have done so repeatedly in the past. Think of the transport and disease problems we have resolved; the forms of human organisation and data device we have invented; the injustices we have righted. These actions brought forth some of most noble behaviour in history. They also created a lot of useful employment.

This Commentary shows how, using a tool already at our disposal, viz. forestry, one powerful solution to avoiding disastrous Climate Change is in our hands. In addition, that, relative to the prize of preserving a beautiful planet, saving it should not be massively expensive (an annual commitment of perhaps 2% of global GDP).

The graph below shows historical actual and a range of forecasts for gross worldwide annual CO2 equivalent emissions. I believe it is not an unreasonable assumption to say that, if we can reduce this annual amount by 10 billion tonnes per annum by 2020 (about 1.5 tonnes for each person on earth) we will have made a meaningful dent in this pathway. 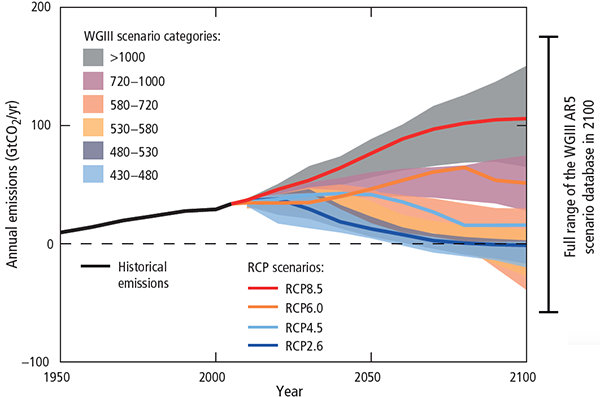 The following plan designs a way to use forestry to achieve 2 bn tonnes i.e. 20% of this target reduction in emissions, relative to “business as usual” emissions patterns.

A “Fund to Solve Climate Change”

The very vulnerability that got us into this mess, the thin-ness of the blanket of CO2 that surrounds the planet, means the problem is also manageable. If mankind has been able to rapidly thicken that blanket, we should also be able to make it thinner once again.

Forestry is one very feasible means by which we might do this. Indeed, in our own small way, with 6.5 m trees planted on degraded land over the past five years, Craigmore Sustainables, thanks to the support of our investors, has already started.

Now take a strip of land that is 1,000 km long, and 600 km wide (green box superimposed on the map below) and plant it with forestry in e.g. South America:

A strip of land that size would measure 60 m hectares. If we plant trees on those 60 m hectares this will sequester 2 bn tonnes (2 Giga-tonnes) each year for the next 15 years.

I will argue that, although entrepreneurs operating in any one country might struggle to devote this amount of farmland to afforestation, it should be readily achievable across multiple countries.

Is this amount of land available and is the project economically feasible?

60 m hectares is 1% of the 6 bn hectares of agricultural land on Earth. The land to be used for the project should be among the most remote and lowest value of that land (Craigmore purchased land of this type for under US$2,000 per hectare in NZ, it should be cheaper in some of the above regions). This amount of land is therefore both feasible and available.

What about the cost of funding this plan? Financing this project at a 10% rate of return for investors would cost $400 bn per year, less than 0.3% of global GDP (suggesting the cost of mitigating 10 giga-tonnes, if similar rates of return can be achieved on other projects, might be around 2% of global GDP per year).

Putting this cost in context, President Obama spent $6 tn boosting the US economy, with projects including tree planting (great) but also lower interest rates for investment bankers and more house building in the Hamptons (less great), to address the 2009 crash. The cost of establishing the above estimated 60 m hectares of land freehold and forestry, conservatively, would be $4 trillion, only 2/3 of that spent by Obama on boosting the US economy in one year.

Nihilistic friends: do not give up so easily. This beautiful planet can be saved. Let’s get on with it.

Climate Change is a terrifying prospect. However, it can be addressed, provided we act with resolution.

Further, the cost of resolution is entirely affordable. Which is not to say we will not have to significantly modify the way we live our lives. The world will need to massively decarbonise transport and energy systems. Along with vigorous use of forestry as a cost-effective carbon-sink.

The farming and forestry industries hold in our hands much of the resource and expertise that is needed to make a significant contribution to this task. In doing this we must be well capitalised, professional and research driven in our approach. We must use data and IT systems correctly in execution of the projects. And we must build good cultures and respect investors’ need for good returns on their capital. These are exactly the processes Craigmore Sustainables has been seeking to demonstrate in our first seven years.

Farming is responsible for 40% of the terrestrial surface of the earth. Society is beginning to ask farmers and foresters to use their precious soil and rainfall resource in new ways in order to avert Climate Change. Helping rebalance the impact of a four metre-thick blanket of greenhouse gas surrounding this planet will be the second great service that farming does for mankind, after our first great service in nourishing the population.

The faithful families and other investors that own farmland will need to be rewarded for deploying land in these ways. In narrow financial terms, then, Climate Change should be seen as yet another great reason to own land. Especially wet, fertile, highly productive remote land. It is logically going to be needed to help save this planet.