Volatility can be good!

As two long years of capacity-driven deflation in Craigmore’s produce markets begins to cycle into price rises, this Commentary reviews the pronounced and bi-directional price actions (conventional high volatility if you like) which has enabled our sector’s capacity to be rebalanced*. I then review how capacity-clearing behaviours are less available to other investment sectors – some of which I predict may adjust by moving abruptly from low volatility states to crashes.

I end this Commentary by returning to Keynes’ 1936 prescription for “euthanasia of the rentier”. I suggest that, counter-intuitively, it may pay to seek out volatile investments in order to avoid their fate.

* it is only now that NZ farm commodity prices have begun to rise that vendors are being pushed, by their banks and others, to finally push farms onto the market. Craigmore was negotiating a pipeline of $50 m of sensibly priced farms 1 month ago. We are now faced with over $0.5 bn of suitable farms on offer. Some of them at the right price and quality.

In my Commentary of May 2015, I observed that a number of factors including low discount rates had led to over-investment in production capacity in many industries. The exemplar being energy production, where the share of the oil and gas sector in the US high yield bond market issuance grew steadily until energy prices tanked in Autumn 2014.

The farming industry was guilty of the same behaviour. Cheap debt and equity capital was one of the causes of annual 2.3% increases in production of e.g. dairy commodities from 2012 to 2015 (Figure 2). Even though global demand for animal protein continues to grow steadily – at over 1.5% per year this production surge swamped markets and caused 2 years of spot prices at or below the cost of production (Figure 3).

Other sectors that have seen large expansions of capacity and hence falling rents and commodity prices including big-city property construction, Chinese steel and coal and global iron ore. 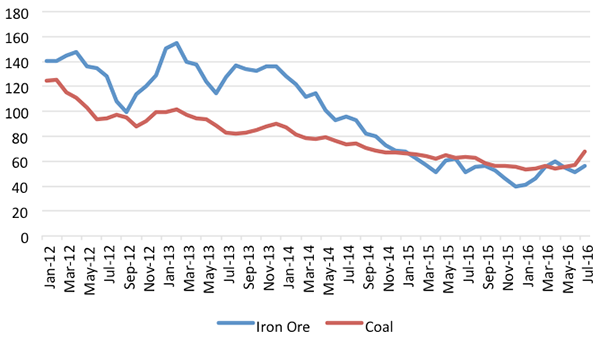 What I want to argue in this commentary is the deflationary blood-bath this over-capacity caused was not in vain. Other than in sectors propped up by governments, we are now seeing dramatic slow-downs in capacity formation (and in sectors like NZ dairy, actual capacity reduction – falling at around 1.5% per year since 2014/15).

In those sectors where capacity adjusts quickly (e.g. dairy production – traditionally a 2 year capacity cycle from peak to trough and 3 to 5 years for the full cycle back to the peak again) this is already leading to quite rapid recovery in spot prices (see graph). 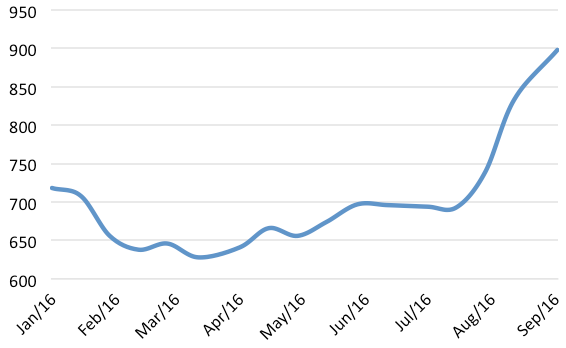 I am no expert on urban property but I suspect that capacity cycles there have longer waves. Are they around 15 years? Whatever they are, and of course capacity formation processes are irregular, it may be a number of years before we see urban property capacity expansion sufficiently curtailed so that rents begin to rise strongly. For the moment one observes the negative phase of the capacity cycle, with property rents in major cities like London, Chicago and Singapore moving sideways to down (see chart). One senses there is, in some of these cities, a large inventory of new construction still to be absorbed and come on stream before things begin to get better. 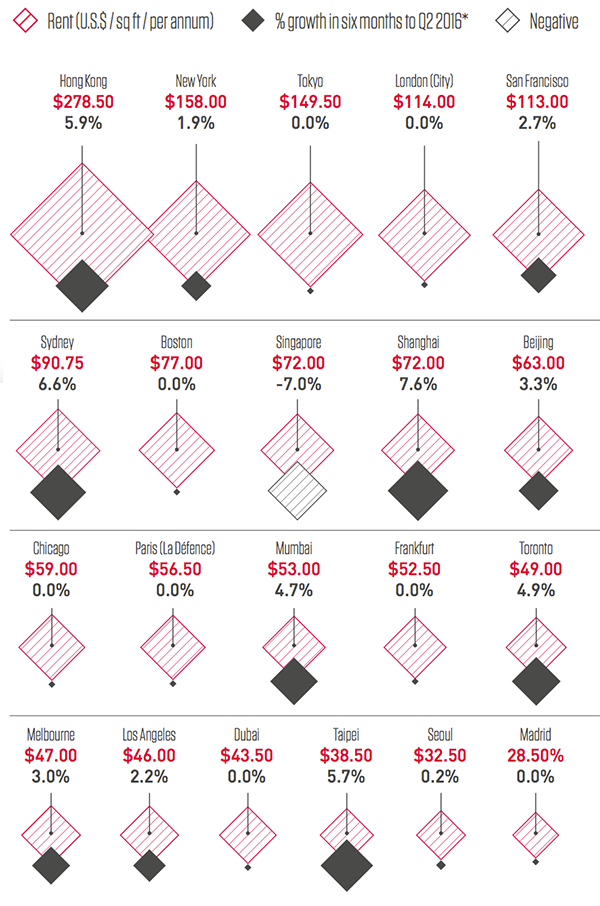 3. Craigmore Forestry as a case study of healthy volatility

Craigmore’s Forestry Partnership is in the process of being redeemed, and looks like it will return around 35% net to investors over its 5 year life. Generating solid if not spectacular approx. 6% annual compound returns in the hands (after all NZ taxes) of international investors. The 6.5 million trees this Partnership planted (on formerly non-forested land) are a source of satisfaction to Craigmore Sustainables and our investors. Not just financially but also environmentally. So far this seems a pretty standard investment story. However, like most active investments, the pathway of Craigmore Forestry was far from smooth. Prices of carbon credits fell from $20 in our early 2011 budgeting to as low as $2 as John Key’s National Party took far too long to bring integrity to NZ’s Emissions Trading Scheme. Pacific softwood timber prices bounced around, especially measured in NZ$ which at one point the kiwi surged to a peak of over US 86 cents – boosted by booming 2013 NZ dairy exports. Furthermore, a new forest seldom impresses in its early years. Forest value gain is measured by annual volume of wood grown. And this is about 25% of its mature rate for the first 4 years, until “canopy” occurs to achieve full photosynthetic gains. For all these reasons the first 16 quarterly reports sent by Craigmore to our Forestry Investors showed singularly disappointing net returns. Therefore, despite having supportive limited partners, they and we could not help being dispirited about our forestry strategy.

In fact, as mentioned above, as tree growth and timber and carbon prices (as well as the NZ$ – recently at a more manageable rate of US 70 cents) bounced around on their various volatile trajectories, these markets eventually, like the market in dairy commodities, “found their feet”. Capacity and demand had adjusted each other into line. As a result not only has Craigmore delivered a satisfactory return to investors but we are contributing an asset to the purchasers that is fairly priced (in a well-balanced, fair capital market). They are buying forests that will contribute high timber production as well as positive environmental outcomes for many years to come. 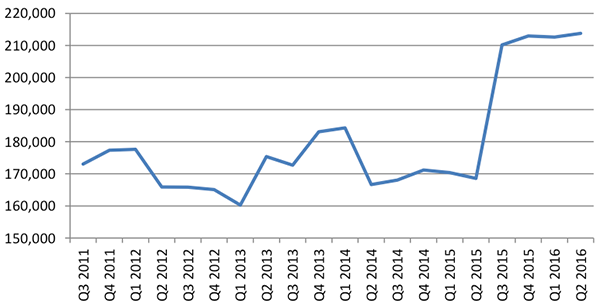 Anyway, the point of this “case study” is to remark that we at Craigmore, and also our investors, were wrong to judge the quality of this asset by the early volatility we saw in its produce markets. In fact, with the benefit of hindsight, the extreme price actions we saw in our output markets, and consequent impact on assessed Net Asset Values, were a sign that the forest product markets we serve were adjusting inventories and capacity to “market clearing equilibria”. Volatility was a good thing, not the bad thing that investment theory (and fearful investor behaviour) accords to it.

4. Non-volatile markets are at risk of crashes

I have now come to think the reverse may also hold. That product and investment markets that do not exhibit market balancing volatility may be more risky, when risk is measured in the returns they are likely to generate, than an observed-volatility based measure of risk would give them credit. Let me give a few examples:

i. Cash
Cash is often judged low risk. Of course, measured in its own denomination, it has zero volatility.

However, as this graph from a January 2014 Craigmore analysis of Argentine bank deposit and farmland returns illustrates, cash can be a terrible investment in periods of currency debasement. The full Commentary can be read here: Craigmore Commentary: Local currency risks of cross-border farmland investments PDF 98KB.

Debasement of currencies in pursuit of economic and political objectives was, at least in peacetime, long the preserve only of populist and unorthodox regimes such as Argentina’s “Peronists”. However this is no longer the case. Zero and negative interest rate policies of many western countries are now unambiguously destroying the value of these “low risk” forms of investment. Currency debasement is coming (or has already come) to a currency close to you.

ii. Leveraged institutions
Next I turn to investments in leveraged financial intermediaries such as banks, hedge funds and insurance companies. Leveraged organisations are often devotees of the Miller-Modigliani theory that low exhibited asset price volatility indicates low risk, and that highly volatile assets are more risky. Indeed this is the source of the “Value at Risk” methodologies introduced to make life easy for 1980’s board members of JP Morgan and now adopted by the industry. Everywhere in finance today, MBAs and quant types talk about “risk” and “volatility” as synonyms.

As you saw from my case study I am beginning to regard the reverse as being the case. Volatile markets may be a sign of healthy market-clearing behaviours rather than impending disaster.

I am therefore concerned that leveraged financial institutions of all types (banks, hedge funds, insurance companies) are likely to be systematically investing in apparently low volatility but still “risky” assets (whose risk they do not appreciate as does not show up in observed price volatility) such as risky credit loans. And using leverage to compound those risks. Avoid!

5. Asset markets for which the state manages or influences capacity or demand

I am also concerned about asset markets whose output, asset prices and observed volatilities are influenced (constrained) by government action. A current exemplar is interference by governments into bond and other asset markets. Central bank financial asset purchase programmes in the UK, US, Europe, Japan and China are now the dominant determinant of world term interest rates in a manner never before seen. As such they have suppressed the volatility, the level and the expectations of global yield curves. 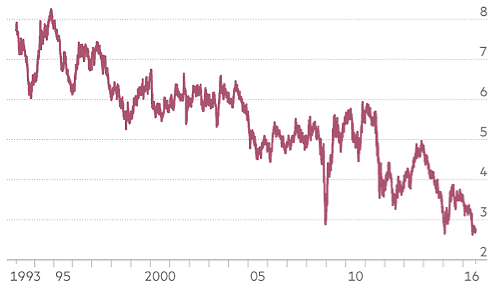 Given risk managers’ processes this lack of volatility (and also the heady historic returns earned by bond investors in recent years) is systematically dampening investors’ appreciation of risk. It is scary to note that if the yield on the US 10 year was allowed to expand from currently 1.60% to where it was only 1 year ago (2.10%) this would cause a 5.36% capital loss on capital value.

Investing to earn 1.6% per year with a risk of losing over 3 times that amount if interest rates normalise only slightly is a peculiar “low risk” investment… although if the Fed takes the US yield curve negative it is true that there is also a chance of further capital gains in bonds.

Absent widespread programmes of negative interest rates (and I do not rule these out), the 40 year bond rally will soon attain its zenith at or near the zero bound. It may now offer investors only meagre further capital gains, no meaningful income and significant risk of large capital losses.

In my view, each of the above “low volatility” asset classes i.e. fiat cash, leveraged financial intermediaries and government influenced capacity markets such as bonds, should be treated with care until such time as they begin to exhibit healthy market-clearing volatility. This recommendation of course contradicts the financial training that many of us received. The approach also suggests, perversely, that comfortingly positive financial statements may be a sign of danger, and the opposite may also be true for “noisy” or even loss-making sectors.

As you can see I have come to believe that volatility (in financial matters just as in a spirited child or animal) is often a sign of health. And that constant prices may not be a good sign at all.

I have written before that John Maynard Keynes’ prescription that society euthanise the “rentier” is now being put into effect by his intellectual followers, 80 years after the publication of his General Theory. He prescribed for passive, “risk avoiding” investors exactly the fate I now expect to see. Which is deteriorations in the relative returns of low volatility asset classes such as cash, financials and bonds. Much of the world’s savings have crowded into these risk-avoiding “rentier” asset classes. Which in turn builds too much capacity within these low volatility and therefore apparently safe investment sectors.

Instead of pursuing these illusory “low risk” investment I recommend, as set out in my above-mentioned Commentary of May, 2015, investors embrace operational involvement in the real economy. Such as via the equity of sustainable businesses including farming.

Many thanks for reading this Craigmore commentary.