The Return of the Land

In November I suggested that inflation would continue, rather than being merely transitory (see appendix). Since then, we have seen US inflation rise to 7%.1 The Federal Reserve has now retired the term transitory and accepted that we are seeing persistent inflation. This short Commentary looks at the likely returns to landowners in an inflationary environment.

Prices of commodities, including farm produce, rose more than 40% in the past year, well ahead of equities at 20% (see the graph below). I believe rural land prices are likely to capitalise these commodity price gains. More generally, I think it is likely that land may out-perform other asset classes over the next 5 to 10 years, as some types of land have under-performed over the last 10 years. 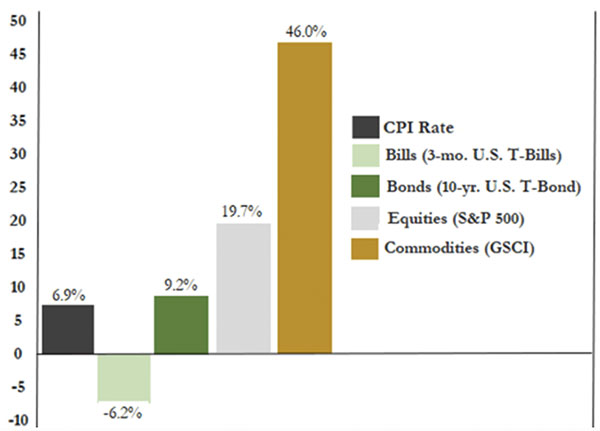 Life in the 70s – amidst inflation

In the second half of the 1970s, in a similarly populist political and economic policy environment to today, inflation in New Zealand averaged 14.8% p.a.2 In this context, when mortgage interest rates were ~18% to 20%, I was puzzled when my father explained to me that buyers and sellers valued farmland in our valley at a ~3% to 7% cash flow yield – “and always would”.

How could farmers like him justify borrowing money at 18% to invest in land yielding 5%?

His logic was that since food commodity prices are correlated with inflation, land prices would capitalise inflation, generating an approximate 15% annual capital gain. Plus, since the technologies of the green revolution were in full flood in the 1970s, landowners were able to increase production (growing capacity) by up to 4% per year, AND develop their land to generate a further, say, 4% annual gain in real revenues. My father could assume these gains would capitalise into the land values. This enabled him to budget annual capital gains of: 15% + 4% + 4% = 23%, implying total returns, including 5% cash flows of 28% – much higher than the cost of even 18% mortgage financing.

He did not avoid some cash flow challenges along the way (sometimes it was a struggle to pay the school fees). However, he came out of that period having not only expanded our landholdings, but also having bought out the other family shareholdings in Craigmore Station.

To put this example of inflation financing in context, and before you conclude the Elworthys are completely reckless, it is worth noting that landowners and their bankers do not expand farms using high LTV ratios. Few farmers take on more than 30% or at maximum 50% debt against their assets. Therefore, my father had the support of the cash flows (and capital gains) on his existing less-leveraged landholdings to support expansion.

The fact that farmers and their banks are conservative in this way is one of the reasons land prices lag commodity prices, especially after a period of deflation. It is a chicken and egg behaviour. For example, in the NZ pastoral sector right now, where land prices have not risen for 10 years, farm cash flows have risen to an unusually high 6% to 12% of asset value (steady improvement always occurs in farming over the long-term). However, despite the high cash flows, land prices have not “taken off”, because few NZ farmers have unlevered equity with which to go out and buy land (in part because of central bank capital restrictions on bank lending).

In Australia this cycle is now further ahead. As a result, rural land prices responded to (also) bumper returns by rising 26% over the past year.3

Once a land market takes off, and capital is being “created” by rising collateral values, then land prices will rise until landowners, thinking like my father, feel those prices have reached their upper limit. Land prices may then pause until the cycle repeats again. Craigmore calculates this behaviour may lead to a 50% to 100% rise in the value of prime NZ pastoral grazing land over the next 5 years, as long as commodity prices remain strong.

The graph below shows asset class returns for differing levels of inflation from 1971 – 2021. If inflation is higher than 6% then, if history is any guide, commodities and then land following, should significantly out-perform other asset classes. Whereas, if deflation returns then commodity prices may under-perform (and not boost land prices). 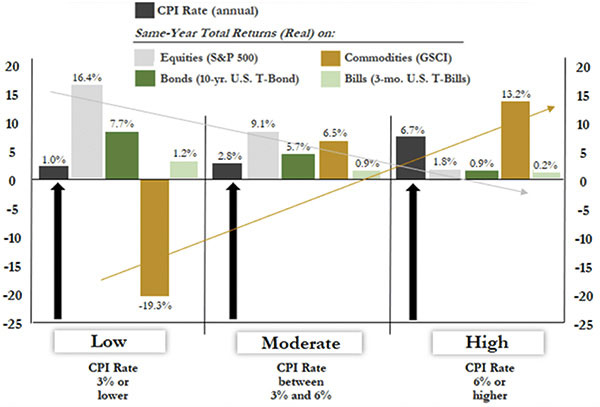 It would be great to hear back any thoughts or related experiences you have had?

Until we find a constituency for sound money we will experience inflation, Craigmore founder Forbes Elworthy argues.

US dollar food commodity prices have risen 40% since the onset of Covid-19 in March 2020. This sharp price jump has reversed a period of farm produce deflation over the previous seven years. In fact, farm gate prices have returned to almost the levels of the food economy spike of 2009-13.

Globally prices of many goods and services continue to rise. At the time of writing (November 2021) US inflation is running at over 6%; the UK at 4.2%; and New Zealand at 4.9%.

Shortages in blue-collar labour, fuel energy commodities, logistics capacity and food commodities drove inflation during the Covid period. Some believe this inflation will now moderate: as Covid recedes, entrepreneurs, including farmers, will be motivated by higher prices to invest to supply more goods and services to bring prices down, or at least to stop them rising further.

Those arguments assume other things remain equal. They would probably be correct if we were still in a globalised, well-financed yet fiscally disciplined world of 2000-2019. After all unemployment and deflation followed the boom of the 1920s and also the expansion ending in 2008.

However, I believe other things are not equal. As a result of likely further policy responses – fiscal largess – the 2022 global economy is unlikely to resemble 1929 or 2009. Instead, it may be more like that of 1974.

Why am I so confident that governments and central banks will err toward inflationary policies?

The rise of populism – witness Brexit and Trump – has seen political leaders focus on the common man or woman rather than previous policies of support solely to asset markets (which led to widening inequality). The result: large unfunded fiscal deficits to pay for these political programmes. The US, for example has boosted expenditure to 192% of receipts to address Covid-19 compared with 167% to address the 2008/9 credit crisis.

Ordinary people have a higher propensity to consume than the rich. As a result, the more populist current policy environment is leading to increased consumption, helping to tighten markets and lift prices.

In agriculture, I expect ongoing elevated prices of many goods driven by supply disruptions and ongoing demand stimulation. Dairy for example, as well as many horticultural crops, are seeing demand growing faster than supply (the graph below illustrates steadily increasing global demand for dairy).

Cheese and yoghurt are convenient, low-carbon intensity contributors to vegetarian diets. This has been a key driver of the steady increases in demand for these food ingredients.

Meanwhile, in contrast to its earlier growth, the dairy sector is experiencing tightening supply. For example, between 2002 and 2017 in NZ – the world’s largest dairy exporter – the area of land used for dairy production doubled to more than two million hectares, putting a cap on global price rises. Yet this area has fallen during the past four years in the face of a land use change to higher and better uses (fruit crops) and environmental restrictions.

It is not only NZ that has reached “peak cow”. Other dairy exporting regions such as Europe are now forecasting declining production in the face of similar restrictions.
As a result, global dairy prices have already risen 38% since Covid-19 broke out.

Supply-side pressures are not coming only from capacity restrictions. Ninety percent of global dairy production is grain-fed (NZ and Ireland are exceptions to this). Therefore, for most producers around the world, the main cost of production is inputs such as corn and soy. Since these prices are up 56% and 44% respectively in the past 18 months this is hardly leading managers of confined herds to want to increase production. Lack of cross-border labour (also a populist measure) is further constraining production.

In conclusion, the mix of supply-side frictions and populist demand stimulation suggest inflation is unlikely to be transitory, in dairy as well as other key sectors of the economy.

This re-emergence of inflation is a radical change in the business environments we face. We have not seen sustained, widespread price rises of this magnitude, in developed countries, for 40 years.