The Future is Asymmetric

1. Grantham analysis: resources are becoming scarce and acting as a handbrake on growth

The previous century saw the price of natural resources suffer continual declines as technological advances allowed for surges in supply. As a consequence, the resources sector represented a diminishing part of GDP. Grantham argues that we have now entered a paradigm shift whereby resource production is significantly increasing its share of GDP, where prices are increasing because the scarcity is “catching up with technology”. In parallel, the non-resource world is probably already scarcely growing in real terms.

In Craigmore’s sector, agriculture, the ‘green revolution’ and consequent over-supply led to US farmers’ share of incomes falling from 8% of GDP in the 1920s to 0.7% by 2002 (see graph). However, since then, their incomes have markedly shifted and grown by 3.4% per year to 1.0% of GDP. 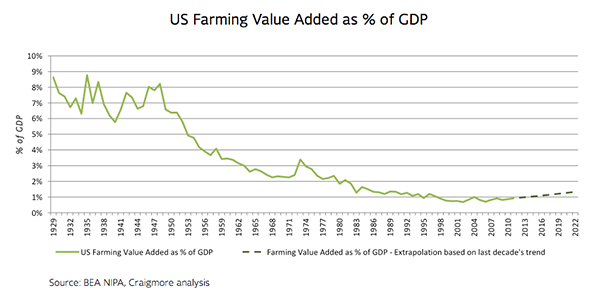 Adjusting for 2.3% annual inflation and real growth of 1.6% this 3.4% annual increase in GDP share equates to 7.3% annual nominal increases in US farmers’ incomes for 10 years. These gains in incomes (which we can assume has been capitalised into farmland values) come on top of farmers’ base operating cash-flows (of perhaps 6% on assets throughout this period). Thus we can assume these farmers have enjoyed 13 to 14% annual gains, over a period of history when the S&P 500 has been broadly flat. Those few US farmers who use significant leverage (most US farmers do not) will have made gains significantly higher than 14% p.a.

In New Zealand we find similar effects. Measured in USD, Dairy Industry operating cash-flows of around 6% on assets p.a. have been massively enhanced by recent increases in the (average) farmers’ revenues of around 12% per annum. Again assuming revenue increases are capitalised into land prices, this implies 18% annualised total returns to NZ farmers over the period when measured in USD. Measured in NZD, returns were lower – more like 12% since local currency rallied against the USD over the period. 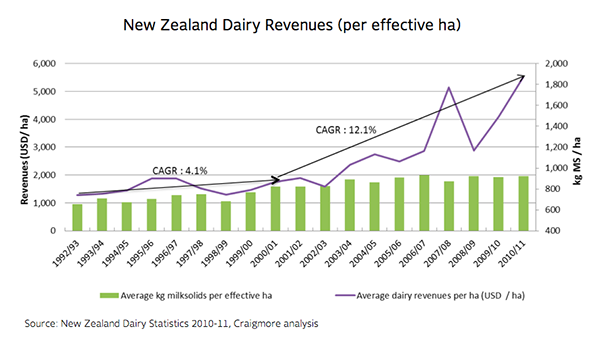 Naturally farmland prices rose and at times got ahead of even these returns in each of the US and NZ. However, at least in NZ, pleasingly, a deleveraging has forced a deflation and, still today, there is the opportunity to purchase NZ farmland that is trading well below the valuations of 4 years ago (and we believe in a fair valuation ratio relative to earnings).

2. “The Future is Asymmetric”

Wiiliam White, a researcher at the Federal Reserve Bank of Dallas, brilliantly explores possible unintended consequences of the experimental money-printing policies which are now being followed in most major countries in a paper which can be read here: http://www.dallasfed.org/assets/documents/institute/wpapers/2012/0126.pdf

White and many others (such as “This Time is Different” by Reinhart and Rogoff) make it clear that the high level of imbalances in major economies must be resolved either by a deflationary bust (widespread defaults) or by an inflationary monetisation of debts. Sovereign debts of 100% to 200% of GDP and associated government deficits are simply not sustainable in a steady state, even though economies with those levels of debt can defy gravity for long periods of time. However, eventually, they must resolve unsustainable levels of debt.

A default is inevitable but what form will it take? Either a series of deflationary “hard defaults”, such as those of the Argentinian and other Latin American countries over the last couple of decades? Or, alternately, default via monetisation of the debts as happened in the West in the late 1940s after World War II, and most recently in the 1970s?

Which of these two end-games is more likely?

I believe a widespread deflationary bust is unlikely to occur. Central banks are now everywhere united in their determination to print money precisely to paper over any deflationary busts. Since the power of their printing presses is almost unlimited (they are unlikely to fail to print enough money to paper over any one crisis) it follows that, of the two possible futures, it is behaviourally/politically far more likely that the “solution” to the imbalances will be inflationary. The recent support by Mark Carney, the in-coming Governor of the Bank of England, of a nominal GDP target and similar moves to use monetary policy in the US to target employment creation, are perfect illustrations of this line of thinking (they are also scarily reminiscent of similar arguments followed in Weimar Germany – see Adam Fergusson “When Money Dies”, 1975: http://thirdparadigm.org/doc/45060880-When-Money-Dies.pdf ).

Most markets (especially bond markets) do not appear to share my expectations. Bond markets are trading at very low nominal interest rates such as 1.8% for the US 10Y and 3.0% for the US 30Y. This inflationary future is simply not being priced by the financial markets.

I conclude that the future is predictably asymmetric and that this insight is not already priced into securities or into behaviour. Future economies are predictably far more likely to be inflationary than deflationary (and any deflation would be temporary, being “printed away” and preceding inflation).

This mispricing must eventually be resolved (hopefully gradually, but possibly in a sharp shock). As inflation rises, interest rates will also eventually rise. In turn, resulting falls in the values of nominal financial assets will destroy large percentages of ordinary people’s savings and shrink real GDP (even as nominal GDP i.e. prices appear to be increasing).

3. We are still farmland investors at Craigmore

Our theme at Craigmore Sustainables continues to be the purchase of agricultural land. We focus on New Zealand, a safe country where land is fairly priced, and also where we know local conditions and risks.

We buy farmland because this formerly underperforming sector is now strongly underpinned by emerging shortages of food commodities, and also because farmland is one of the few “low beta” real assets in an investment world that is likely to face an inflationary future.

Wishing you a very Happy Christmas from the team at Craigmore,