Farmgate prices and returns for NZ farm produce have been strong in recent years and prospects look good: 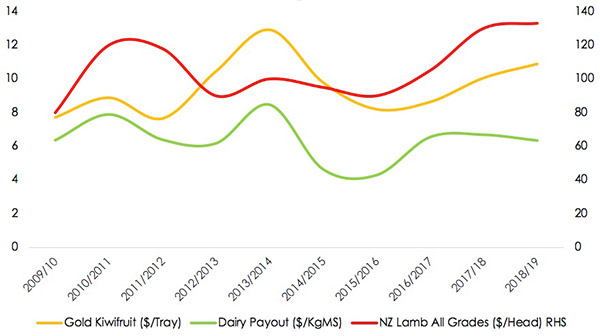 Yet farmland prices in the largest NZ farm sector (dairy and associated grazing) have fallen by 10% over the past three years. Dairy land prices declined in response to two years of low milk-prices (2014-16) and then quickly recovered much of that loss as milk prices recovered to the long-term average from 2016. However, they have been drifting downwards in the past 18 months, in spite of three years of good profitability, and a fourth good season on the cards. 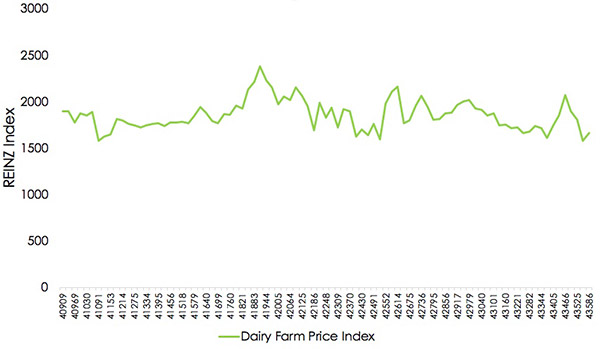 As a result of good per hectare returns but falling land valuations, % cash flow ROA of New Zealand farms is currently some of the highest I have seen in my farming career. For example, Craigmore Canterbury dairy farms are budgeted to generate an EBITDA return on asset of 6.5% this year, with the top performing farms generating over 8%.

Why have NZ farmland prices fallen even while farm produce prices rose?

I believe the reason for this unusual state of affairs is NZ policy makers choosing to systematically restrict the supply of money and credit to the economy. I call this “Quantitative Easing in Reverse”.

What economic polices was NZ pursuing before the new measures? 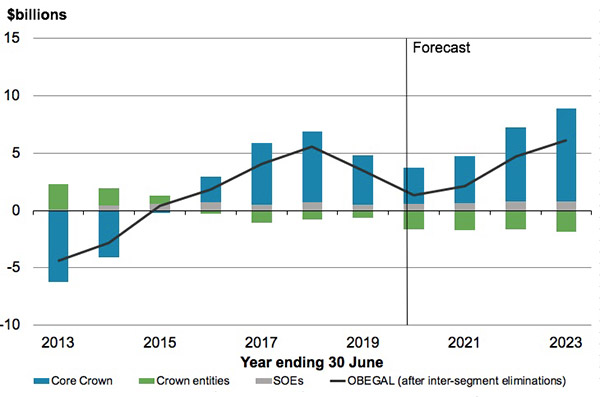 Despite tight fiscal policies (in fact New Zealand is running budget surpluses – graph above) the country has had close to full employment for 10 years (unemployment is below 5%). NZ has been generating real economic growth of average 3.4% in the past 5 years, well over that of the UK.

One of the main drivers for this has been factor productivity improvements in NZ’s most important economic sector (responsible for 62% of exports in 2018) namely agriculture.

The Achilles heel of NZ’s economy, however, at least until 2016, has been an over-valued currency, as illustrated by persistent current account deficits. 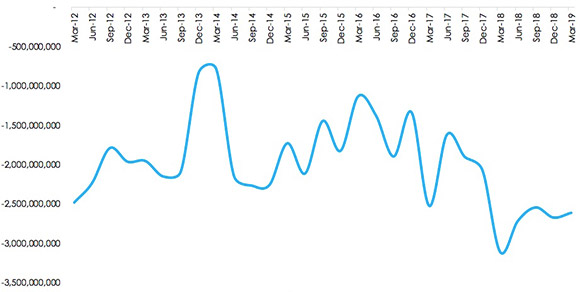 One reason the currency was so strong up until 2016 is the NZ central bank, unlike those of many of our trading partners (US, China, Japan, Europe, UK) did not use QE or other credit policies to support asset prices, so NZ for many years had far higher real interest rates than most:

As I have argued in earlier Commentaries (“QE is causing Capacity-driven Deflation”and “How’s an Investor to survive “post QE?”) these orthodox, fundamentally sound economic policies made NZ the “good boy” of the international financial community. However, hardly anybody else was playing by the same rules. On the contrary, as can be seen above, most other nations maintained artificially low interest rates thanks to QE, as they turned a short-term recovery policy following the GFC into a long-term experimental “fix”.

Ironically being too much of a good boy can get you into trouble. The relatively high NZ interest rates prevailing over most of the decade from 2007 to 2017 attracted “hot money” into the NZ banking system (on-lending of which encouraged frothy investment into especially residential housing). Meanwhile, these sources of international demand for NZ dollars lifted the NZ$ (lowering returns to NZ exporters):

What are NZ’s economic policies?

Since 2015 the New Zealand central bank has acted to restrict bank lending first into the overheated residential mortgage market and more recently to farmland. And a change of government in 2017 has seen restrictions to the flow of incoming overseas capital for some sectors of the economy. We will discuss how these restrictions apply to NZ farmland before turning to their impacts.

The Reserve Bank of NZ has announced a very significant increase in the proportion of mortgage loans which the NZ banks must fund with equity. On the current $64 bn of NZ farm lending, if the credit status of these loans remains unchanged, the new rules would require a hefty $7 bn additional equity capital. This quite radical change (being progressively introduced over four years) is prompting a further reduction in bank appetite for dairy loans (where the average farm was geared 50% of asset value before land prices fell, so the average farm is probably 55% now):

A second restrictive measure has come from the coalition government in NZ, who have tightened up restrictions* on overseas purchasers of fully developed farmland and banned the purchase by overseas buyers of already built residential property. Foreign buying of farmland was never more than 4% of annual NZ farmland turnover (see table). However, it was an important source of marginal demand. The bid from international buyers, despite on-going purchases of farms via the few organisations, like Craigmore Sustainables, who are compliant with the revised Ministerial guidance (see footnote below) has fallen sharply.

* Craigmore Sustainables acts to improve farmland funded with international capital. This fact, plus the NZ domestic status and control of Craigmore, means it has continued to receive approvals for investment in NZ farming and forestry properties e.g. Craigmore has received approvals for four applications (with total improved value over $100 m) so far in 2019. Craigmore has received 27 OIO approvals since we commenced buying NZ farmland in 2009 and have only ever had one application refused.

Falls in Interest Rates and NZ$

These new restrictions on the supply of capital are reducing buying pressure on NZ residential property and also farmland (e.g. as our second graph shows dairy land prices are off 10%).  As a result, in turn, the central bank in NZ has finally been able to significantly reduce interest rates:

Since these falls coincided with normalisation of US interest rates this has now led to the NZ swap curve being below US$ interest rates:

These falls in NZ interest rates are lifting farmgate produce prices as shown in the first graph, above.

These favourable returns, and head-winds for importers, are in turn finally helping NZ to tighten up its current account deficit (falling steadily for 3 years as a % of GDP).

Summary view of the change in NZ’s policy environment

I hope the above provides a summary of the unusual changes currently going on in NZ economic policy. I have argued in previous Commentaries that Quantitative Easing is a poor policy measure. It over-values the assets of the already wealthy; negates the role of interest rates as a tool for rationing capital; and supports the “zombification” of the economy. As an amateur economist and citizen, I am therefore pleased that New Zealand is going in the opposite direction, and using the capital markets to ration capital, rather than purveying cheap money and inflating asset prices. In the long run, this will also be very good for Craigmore’s international investors. Especially those entering NZ in 2019 when asset ROAs have never been better, and the NZ currency is not expensive.

The Craigmore Farming Partnership dairy farms, even though they are throwing off good cash flows (e.g. cash dividends to investors should be ca. 5% of NAV in the coming year), have fallen in value along with the wider market. This, plus some special factors in the current price of Fonterra shares (also at a cyclical low) mean the NAV of the Craigmore Farming Partnership is at 92% of its inception price (excluding distributions) from 7 years ago.

I hope this Commentary helps our friends in that Partnership appreciate that this disappointing capital performance in no way relates to the quality of the farms and their prospects. Instead it is predominantly the result of a one-off change in the wider policy environment. Eventually the Farming Partnership will benefit from a NZ farmland capital market already operating at higher ROA’s as a result of New Zealand’s unique “QE in reverse” restrictions. In the meantime, I am personally raising funds against my other assets to participate in the modest number of units being redeemed ahead of the 8 year liquidity event next year, and I am not alone. As the dairy land market bottoms out and we head into what appears will be a very profitable farming year, a number of investors have moved to increase their exposure to CFP in recent weeks.

At no time since the War have financial assets traded so expensive. Meanwhile, I have never seen natural real assets trading at such good value. That anomaly will not persist forever.