Commitments to reduce greenhouse gas (GHG) emissions recently made by companies ranging from Tyson Foods (US) to Tesco (UK) are summarised below. We then review how Map of Ag is helping firms use data services to help their farm suppliers deliver these commitments. The Commentary ends with a case study of the impact strategies Craigmore is deploying on its farms, orchards, and forests. 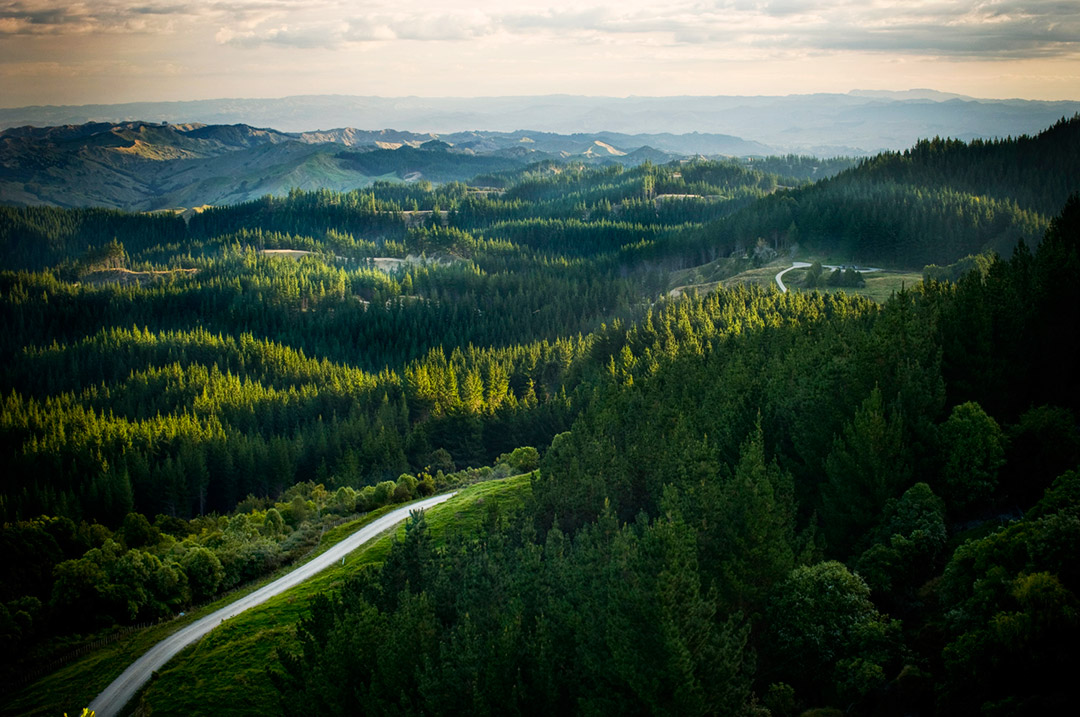 Non-CO2 emissions (methane and nitrous oxide) from agriculture are estimated to account for approximately 4.8 – 7.6 gigatons of CO2 equivalent greenhouse gases per year (IPCC/FAO). This accounts for 9 – 14% of mankind’s total GHG footprint.

In June 2020 the UNFCC1 launched the Race to Net Zero campaign to support the global Climate Ambition Alliance to achieve Net Zero emissions by 2050. Impressively Danone has committed to migrate all the food they bring to market to net zero by 2050 and J. Sainsbury will migrate its operations to net zero (although not necessarily those of its farm suppliers) by 2040. Several food and farming operations, including Fonterra and Craigmore, are working to produce net zero dairy products well before then.

What are food brands and retailers doing?

As well as committing to change their own (“Scope 1”) operational emissions many food brands and retailers are also committing to manage their (“Scope 3”) relations with farm suppliers in such a way the emissions footprint of these farms is also reduced.

This table summarises some of the larger Food Companies and Retailers’ commitments to reduce their own (Scope 1) or their farming suppliers’ (Scope 3) emissions. 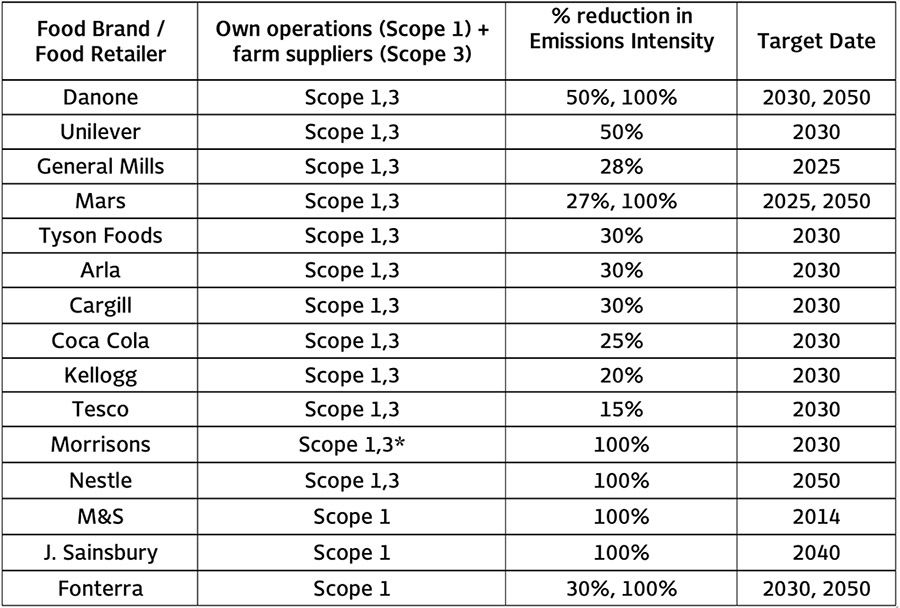 What are the food brands asking from governments?

As well as making the above commitments some food companies are lobbying governments to increase mechanisms to trade in and price carbon. Olam, Nestle, Danone and Unilever have all weighed in on this (see Appendix One). Evidently to meet emissions commitments they are going to need carbon markets in which to buy off-sets for that part of their target that are unlikely to be achieved with reductions from their own operations or from their growers.

What are farm leaders saying?

Among farmers themselves, as reported in earlier Craigmore Commentaries2 the National Farmers Union of the UK has a policy of reducing net emissions of UK agriculture to zero by 2040. Their schematic below sets out some of the ways they envisage this happening. 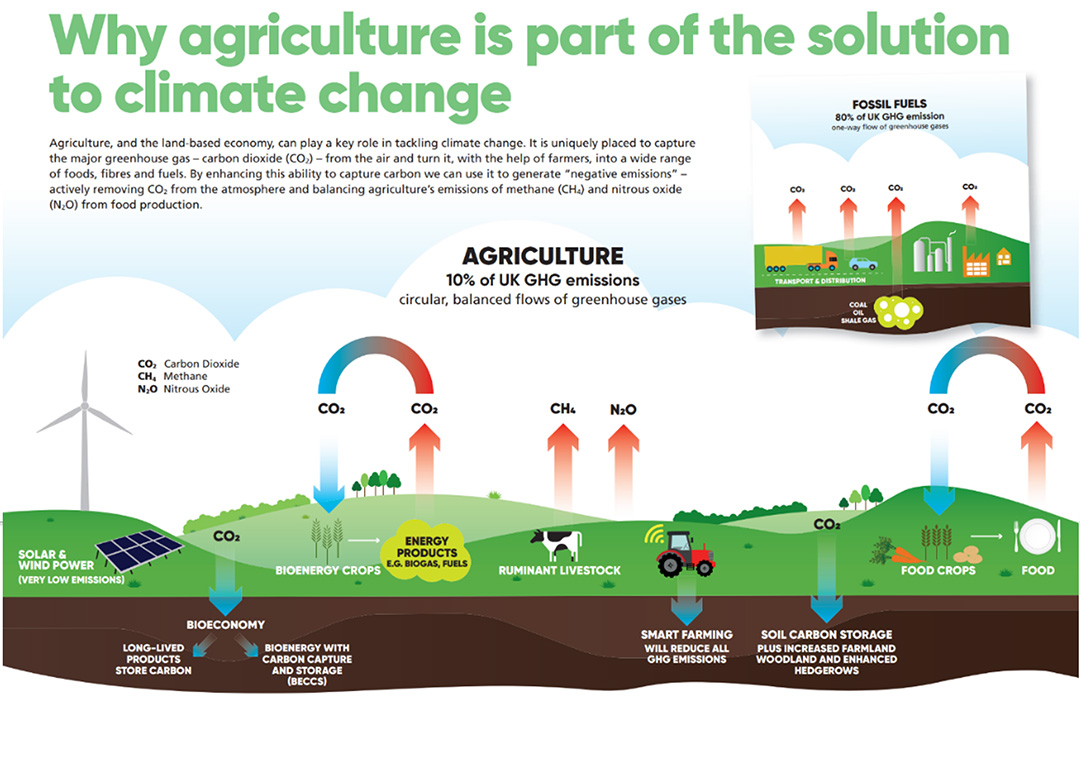 Australian farmers have also set the target of being net zero – in their case by 2030. Notably the red meat sector in Australia, although responsible for 70% of emissions from Australian agriculture, have also backed a 2030 net zero goal. They plan to be the first livestock sector producing carbon-neutral beef.

Meanwhile in NZ farmers agreed a plan to reduce greenhouse gas intensities in October, 2019. Even though this was a step-down from farming’s inclusion in the country’s Emissions Trading Scheme, as Jacinda Ardern’s government had hoped, it was still a historic acceptance by NZ farmers of the need to change on-farm practices to shift footprints.

Are some farming systems “better”?

Day and night-time temperatures, rainfall, irrigation, evapotranspiration, sunlight hours, altitude, latitude, soils, and many other factors mean that, in some places, crops grow two or even four times faster or more resource efficiently than in other places. In economic terms this means average “factor efficiencies” (per unit of land, water, or fertiliser) vary widely between farming regions, which can lead to economic and environmental comparative advantages. For example: 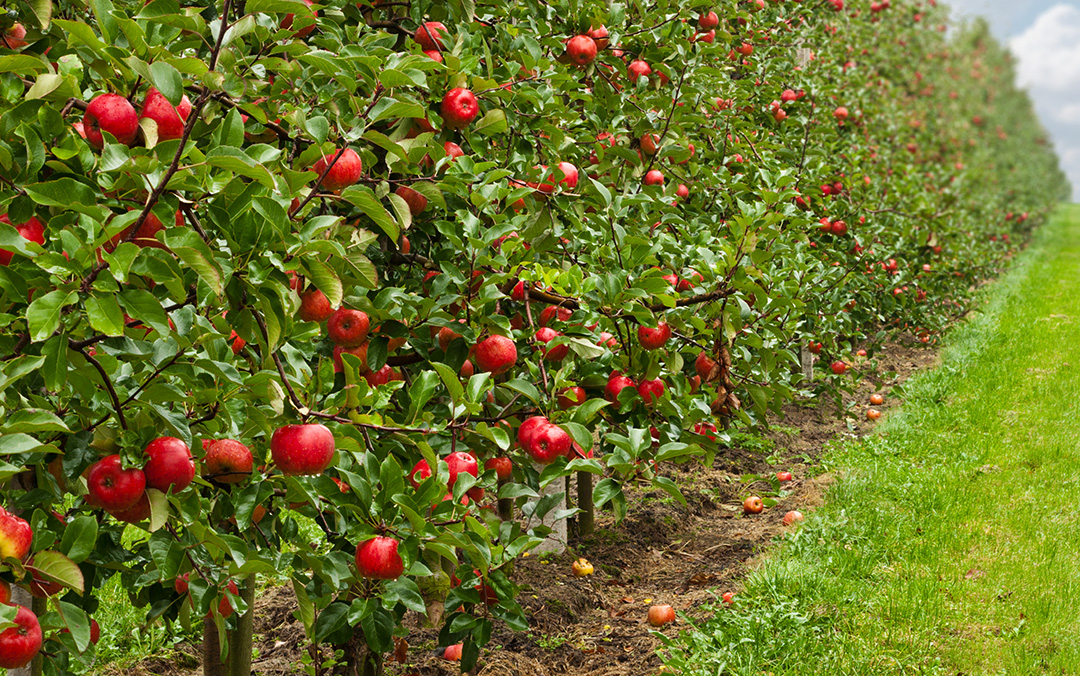 Readers will have their own view on whether NZ Sauvignon Blanc falls into the same world-beating category, but you get the idea. I often explain to investors that farms produce commodities, but land itself is not a commodity. Each farm or forest is a unique claim on nature’s bounty.

Environmental intensities correlate with factor efficiencies. Thus, some farming systems and locations can emit far less greenhouse gas per calorie of food than others. Research from Lincoln University found that, from paddock to plate, NZ dairy products have half the carbon footprint of locally grown European product3, even after adjusting for transport costs, and NZ production of sheep meats is more efficient still.

If this is correct, it follows that not all pathways to lower emissions need to be high tech (although these will also help, and examples are discussed below). Many gains can be made simply by accurately measuring the factor efficiencies of farms and rewarding those growers who can combine fewer inputs (and so less pollution) per unit of food. With all calculations adjusted, of course, for emissions from transport.

Craigmore pointed out in our April 2020 Commentary4 that approximately 25% of world food crosses a border before it is consumed (see graph on trade in apples below as an illustration). Further, this ratio has been steadily increasing with the concomitant benefit to general food security and nutrition.

This trend may well continue as the low emissions footprints of some farming regions help food brands and retailers meet their targets for emissions reduction.

What is Map of Ag doing to help food retailers and food brands shift their footprints?

Map of Ag is now a £6 m turnover platform that helps over 50,000 farms share data with service providers as well as processors, food companies and retailers. Map of Ag is experiencing a growing urgency among its agri-food clients to better define, measure and manage sustainability.

Map of Ag CEO Richard Vecqueray estimates that support of sustainability (including animal welfare) contributed one quarter of Map of Ag revenues two years ago but this will soon exceed 50%. Further, food brands and retailers have not slackened their commitments during Covid-19. Head of Sustainability at Map of Ag, Hugh Martineau, told us “food value chain firms’ sustainability commitments have, if anything, been accelerated by Covid”.

Map of Ag helps groups of farms with benchmarking, often in real time, of outcomes e.g. harvest logistics, animal welfare, soil, water, and energy KPIs. Agri-food companies (including a number of those whose emissions commitments are summarised in the above table) employ Map of Ag to establish baselines such as GHG emissions intensity and to shape roadmaps to meet future targets.

As an essential industry, farming itself has carried on bravely and largely unaffected by Covid-19. However, this is less true for farm service providers who have in some cases been disrupted. For example, auditors for the 40,000 UK farms who comply with Red Tractor farm assurance standards were unable to visit farms from early March 2020. Map of Ag was able to help Red Tractor plug this gap by making farm remote observation and data capture tools available to an average of 1,000 new farms each month. Interestingly, both farms and food companies still want a human involved in the assessments. It is just that the many documents reviewed by the auditor are now transferred to them over the platform. Farm visits are now able to be conducted by the camera on a farmer’s smart phone, with the farmer moving around, as directed by the assessor, to show them the farm.

What is Craigmore doing about greenhouse gases?

Craigmore Sustainables is the only New Zealand land manager that operates at scale in each of New Zealand’s three core primary sectors: horticulture, dairy farming and forestry (each now approx. 1/3 of Craigmore’s asset base). This capability allows Craigmore to identify and execute the most appropriate land use for each parcel of land. As noted above, re efficiency, getting these decisions right has a large impact on greenhouse gas intensity (provided operational execution is also excellent).

Starting a decade ago, Craigmore became the largest planter of new forests in NZ, planting around 3 million trees per year – in each case planting comparatively unproductive pastoral land with productive carbon-sequestering trees. Forests which Craigmore established between 2010 and 2012, are sequestering sufficient carbon to offset the net greenhouse gas emissions from a small NZ city for 17 years. Craigmore will launch a new long-term forestry partnership in late 2020 that will create an even larger greenhouse gas sink. While still generating returns from timber and increasing national employment. The picture below shows Craigmore-managed grazing lands that are being afforested this year – i.e. planted with trees to grow a forest like that in the background. 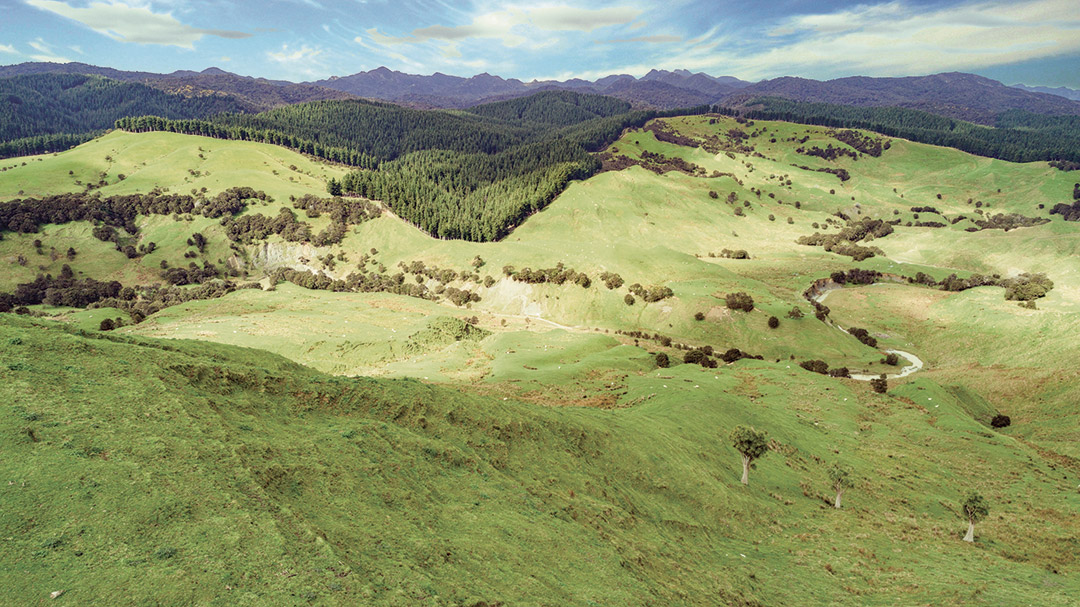 However, as noted in previous Commentaries, while afforestation is a powerful greenhouse gas pump, it is not the ultimate long-term solution – it really buys some time (20-40 years) to implement detailed operational changes to production systems within each industry to reduce greenhouse gas at the source. On this path, Craigmore is seeking new opportunities to reduce the greenhouse gas intensity of food and fibre production. For example, we are in the second year of a commercial trial of breeding beef calves from dairy cows. This avoids the greenhouse gas emissions of a beef cow, significantly reducing greenhouse gas intensity of beef production (we estimate by 30% to 40%). Craigmore is also sequestering carbon through other land use changes. We are actively converting higher fertility pastoral land into orchards and vineyards, which have proven capability of sequestering carbon over time. (e.g. net 3-8 tons CO2-eq per hectare per year)5. Craigmore is also on track to become NZ’s largest grower of organic gold kiwifruit.

Despite these sustainability credentials Craigmore has resolved over the past year, based on a desire from our team and our capital partners to do more in this area, to “up our game”. Specifically, Craigmore is moving our footprint from just sustainability towards “impact”.

Examples of current Craigmore programmes include:

As can be seen from the above, the global farm-food industry is taking important steps to address climate change. Like many other industries, it still has a lot to do. However, as we say at Craigmore “it is never too late to do the right thing”.

3. See this study from Lincoln University. Sea freight is cost efficient and has a low carbon footprint.