Dairy as a Derivative of Grain

Exploring dairy market returns as a derivative of grain markets

The key driver of these price rises was a draw-down in global dairy inventories in the past 12 months. A sharp increase in demand for imports from China was needed to replace falling domestic production. Fonterra Chair John Wilson reported at the Fonterra AGM on 14thNovember:

“The forecast milk production in China this year had fallen short by perhaps 20%, creating a dairy products shortfall that Fonterra and other suppliers were filling. China had suffered a wave of virulent foot-and-mouth disease that had taken out millions of cows on small farms and the developing larger farms have not replaced yet the lost milk production”.

News has also emerged of major buying in diary markets as a result of a shortfall in production in Russia. Agrimoney reported on 21st November:

“Russian efforts to boost its dairy output are being undermined by the slow release of subsidies, and by underpayment, which is leaving many producers facing collapse and increasing the country’s import needs.

Russia milk output will fall even further than had been expected this year, by more than 500,000 tonnes to 31.4m tonnes, and remain stagnant in 2014 despite the incentive to producers from lower feed prices and rising milk values, US Department of Agriculture officials in Moscow said.

Domestic output of 31.4m tonne this year would be the second lowest figure since the collapse of the Soviet Union, behind only the 31.1m tonnes in 2006”.

In New Zealand, a 1-in 50 year drought in 2013 also reduced global milk product inventories. Many of the 75% of NZ dairy farmers that are non-irrigated suffered production losses, leading to a 2% drop in supply for Fonterra rather than the 3% rise forecast.

The full season 2013-14 Fonterra pay-out to farmers is expected to be close to NZD 9 per kg of milk solids (including dividends), up from NZD 6.16 the previous year. As the following typical budgets for mature (non-irrigated) NZ dairy farms illustrate this rise has lifted EBIT cash returns on assets from 7% to 9.5%.

Once the improved pay-out flows through to NZ farmers (which will not fully hit bank accounts until mid-2014 due to retention) we expect to see a rise in NZ dairy farmland prices. The price of land in some prime areas has already moved since the pay-out was announced. Farm values in these areas are now 10% to 15% above the range in which they have traded for the past 4 years. Volumes of transactions at these new prices are thin (only 3 or 4 farms in our focus areas have traded at these prices). As yet, secondary areas have hardly moved. Nevertheless, we expect that land prices will approach those of the past market peak of 2006-2007 at some point in 2014.

If the high pay-out is sustained for another year, the market could then really start to move.  Generally, still over-leveraged balance sheets are being repaired by improved cash flows and collateral valuations.

In long term equilibrium NZ dairy farmers typically value land at cash-flow yields of 5% to 7% rather than the 9% to 10% they are currently receiving. Interest rates have fallen in NZ (we were borrowing at 10% four years ago, we now pay 4.7%). In addition, banks are once again starting to compete to lend to farmers. These factors will also help lift prices. The graph below, showing the long term relationship between the dairy commodity price in NZ, and land prices, suggests a 20% to 25% move is possible if current dairy commodity prices are maintained.

The previous section begs the question: what are future prospects for international dairy commodities?

Since 90% of milk in the world is produced from grain it follows that the key long term driver of dairy supply and demand and therefore international dairy commodity prices is the profitability of grain fed dairy systems. To illustrate the behaviour patterns of farmers we again quote from Fonterra Chairman Wilson’s November AGM speech:

“The grain-fed herds of Europe and North America are responding to the high world prices, and globally traded dairy products would increase from 50b litres annually to 90b in 2021”, he said.
“The best estimate of NZ’s production growth over that time was from 19b litres to 22b litres, so other countries from the European Union and Latin America would increase exports.
Dairy demand, however, was forecast to increase from 395b litres globally last year to 515b in 2021, which exporting countries had no chance of meeting,” he said.

If dairy farming is profitable, land and grain resource will be shifted from other crops/uses and into dairy. If less profitable then resources devoted to dairy will shrink.

What is the likely equilibrium in this “balancing act” between grain prices and its “derivative” dairy commodity supply?

Over the past five years, as they shocked up to a new equilibrium, grain prices got well ahead of dairy prices. During that period farm industry capacity began to shift out of dairy (a lot of especially smaller dairy farmers left the industry in the US, in the UK and in Europe). As can be seen in the graph milk prices are only now beginning to lift to levels that will slow or reverse this trend.

But what is the key driver of grain prices? Some recent graphs from the Chief Economist of the USDA* lay out an answer to that question in some detail. In summary, he argues the key driver of current and future increasing grain prices will be high levels of increase in demand
for pork and other protein products, including dairy, in China and other rapidly developing societies.

His reasoning runs as follows:
a) Meat production and consumption is rising in China and other emerging markets: 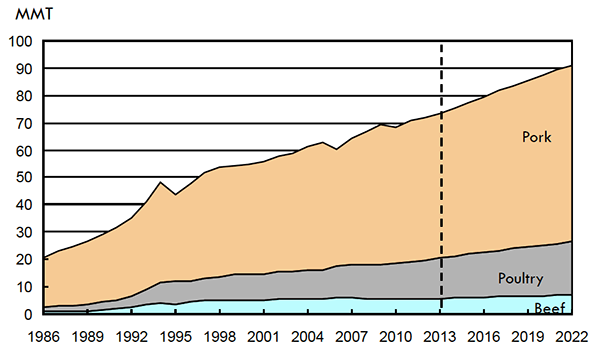 b) Now, the argument goes, in terms of growing that meat, China is self-sufficient in cereals. However, you cannot fatten pigs on wheat and barley alone, they need some protein. Hence China has become a massive importer of US (and Brazilian) Soy. In the process, China has become the single key source of demand for US acreage:

The Key Demands for U.S. Acreage 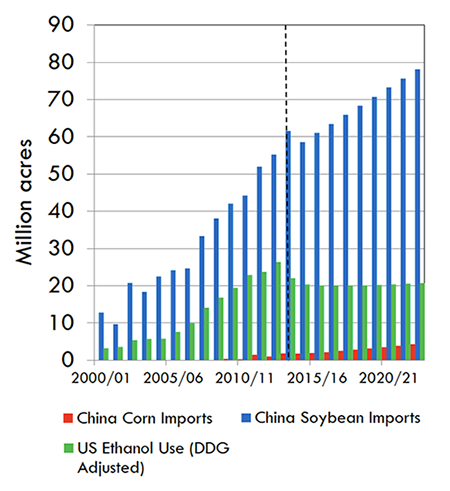 c) And China is not the only region whose grain imports are set to grow: 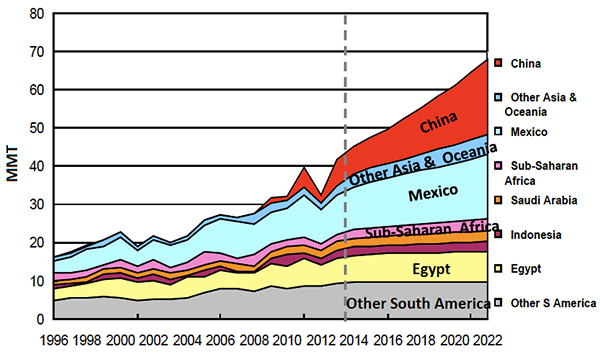 As a result grain prices are forecast to remain in their post-2007 range (although the USDA expects they will soften from the very elevated levels of late 2012). Grain prices have softened into the autumn, with a large global harvest, but the forward-looking market is pricing in the continued tight inventories.

As long as grain prices remain at the new equilibrium levels that have prevailed since 2007 then the outlook for the global milk market is positive.

On the demand side China’s per capita annual milk consumption has now increased from 3 kg in 1995 to 25 kg in 2013. However to match Taiwanese levels it would need to double again to around 50 kg. We are confident there is plenty of demand – the key macro risk area we focus on is not the demand side, but the supply side, which will be driven by global grain prices, but with two to four years lag for capacity to respond.

As always with agricultural commodities, there will be inventory cycles and volatility in prices in future. And there is a risk that high levels of grain production swamp world grain markets for two or three years and eventually spark a major dairy renaissance*. We think this a minority risk but it remains a risk and, accordingly, we choose to have leverage on our business at significantly lower levels than average in New Zealand dairy farming.

For five years global dairy commodity prices lagged those of grain. This led to stress in the grain-fed parts of the dairy industry, and was accompanied by good, but not stellar, cash flow returns of around 7% on assets in the NZ dairy industry.

In response to lagging supply as capacity left the industry, dairy commodity prices have now moved up sharply, lifting dairy farming returns worldwide, and lifting NZ dairy returns close to 10%. Like the Chairman of Fonterra, Craigmore is confident that the likely tight on-going conditions in global grain markets means that even risks like increased milk production from Europe should be absorbed by rapidly growing global dairy demand. As farmers, we are always aware, however, that our commodity prices go through cycles, themselves driven by shifts by farmers toward crop-types with the highest returns. We would expect a very positive period in dairy for the next 2 to 5 years, then likely a soft period as capacity returns (subject of course to grain markets not themselves going into further shortage).

We would be interested to get comments on any aspect of the above Commentary.

Wishing you a merry holiday season from the Craigmore team.

*One other downside risk to dairy prices is the 2016 removal of European dairy quota restrictions.  Europe accounts for 30% of the global trade in dairy (behind NZ with 35% and ahead of the US with 18%). Experts expect modest growth of dairy production in Europe as quota is lifted. In countries like the UK high grain prices and low milk prices have driven significant capacity out of the dairy industry. Such countries are in fact producing less milk than their quota so removal of quota in those regions is expected to make little immediate difference. However, in the UK, and especially in countries like Germany that are producing at or close to their quota limits, now that dairy prices have improved some farmers may re-configure their farms for dairy. However, this is not something that happens overnight an industry that has seen significant bankruptcies during the past 5 years when grain prices got so far ahead of dairy prices. The re-building of capacity in the European dairy industry will be gradual, and take a significant number of years following quota removal in 2016, not months.