COVID in the mountain kingdom

How has NZ performed economically and politically in response to the COVID-19 crisis?

This short Commentary reviews how New Zealand has responded to COVID-19 virus. 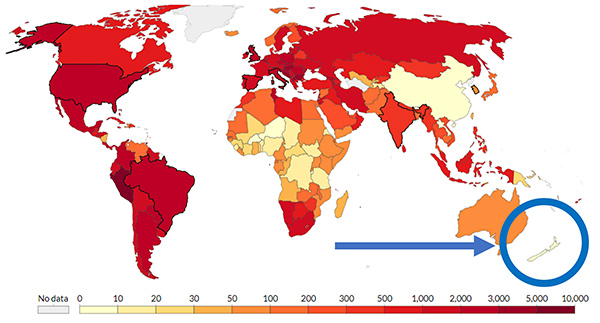 Measured in deaths per capita the New Zealand policy of severely restricting travel to its shores has led to a “good epidemic” – if there is such a thing (see map above). However how did NZ perform on other dimensions – including economically and politically?

The NZ economy went into the crisis with net government debt of just over 20% of GDP. 1 The IMF forecast earlier this year that this will rise to 28% of GDP by 2024 in response to COVID (graph below of forecast NZ debt levels alongside those of comparable economies). 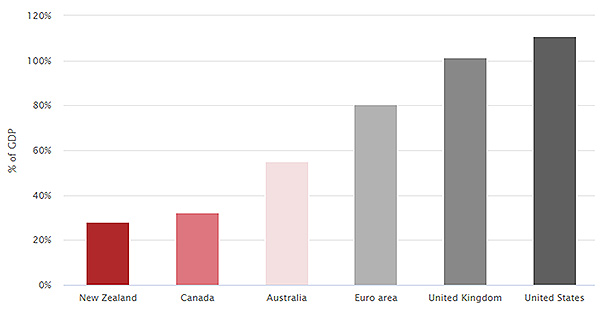 The weakest aspect of NZ’s economic performance relates to its labour force. However, the problem is not one of unemployment but the opposite, labour shortages (of course we are not alone – tight labour markets and supply chain issues are not isolated to New Zealand and are causing issues globally). The NZ unemployment rate is 4.0% of the workforce vs 4.80% in the US. The sealed border (noting that it has been sealed against travel but not against trade) prevented an estimated 15,000 backpackers and RSE workers from regions such as the Pacific Islands and Philippines entering NZ to work in agriculture and forestry.6 As a result, labour costs paid to blue collar workers by employers like Craigmore have risen by between 5% and 20%. Fortunately, this increase in costs has been more than off-set by increases in farm and forest product prices which, as I will discuss in my next Commentary, have risen strongly.

In summary, New Zealand had a good crisis in economic terms. This stands to reason. 60% of NZ’s exports are of naturally grown food and fibre products. Demand for these products can be expected to be inelastic – people continue to eat, even in a pandemic.

Apart from a nation-wide lock down in March-April 2020 and a regional lockdown in Auckland in the past nine weeks (to try to eliminate a regional outbreak of the Delta variant), NZ business, education, social, cultural and sporting life have continued in relative normality during the wider global pandemic lockdowns. As a result, New Zealanders, on the whole, have been glad to accept isolation as the price of having no community transmission. Accordingly, they rewarded Jacinda Ardern with a resounding victory in late 2020 election.

Most Kiwis are property owners (65% of families own their houses).7 This makes New Zealanders instinctively financially conservative. NZ has no capital gains tax, and the top rate of tax, until COVID, was 28% for corporations and 33% for individuals.8

On social issues, however, many Kiwis are progressive, for example NZ was the first country in the world to give women the vote in 1893.

As a result of these contrasting political forces NZ governments tend to oscillate from election cycles where support of businesses and house owners are to the fore, vs. other cycles where social, racial, and environmental justice are emphasised. Noting however that swings in either direction have tended to be modest, and often accretive, as changes made by one government are rarely substantially undone by their political rivals.

The recent unsuccessful attempt to eliminate a regional Delta outbreak via a tough lockdown (in Auckland Province) has created a different political division. Aucklanders are feeling bruised by nine weeks of severe restrictions, which have been ultimately unsuccessful in eliminating the disease. While others, elsewhere in the mountain kingdom, have continued with, more or less, their lives as normal.

Over 85% of Kiwis over the age of 12 have now had their first vaccine and 71% are fully vaccinated. The Government has announced a regional traffic light system allowing New Zealand to return to “normal” that will go into effect when greater than 90% of Kiwis over age of 12 have been fully vaccinated. Given this, and the failure to eliminate COVID in Auckland, it is becoming clear NZ will soon need to learn to live with COVID.

Navigating this change may present a challenge for Jacinda Ardern’s until now adept political leadership of the “team NZ” response to COVID.9 Indeed, amidst the heartache of the persistence of the disease in Auckland, Jacinda Ardern’s popularity has fallen from 65% of Kiwis preferring her as Prime Minister at the start of the pandemic to 51% in the most recent Talbot Mills poll.10 The government have today announced significant changes to the border restrictions, shortening the managed hotel isolation period for returning Kiwis.

I will be travelling to New Zealand this weekend. I will aim to report back on how this island nation takes its next steps into a future which will involve living with COVID.

My next Commentary will explore inflation in food produce prices. Globally these have risen over 30% to September compared to the same period a year before.11Will this be a short-lived blip or are there forces at work that might make this a new equilibrium?

1. Net core Crown debt as a percentage of GDP was 20.2% per the Treasury’s interim financial statements released 31 October 2019. Interim Financial Statements of the Government of New Zealand Four Months to 31 Oct 2019 pdf
2. Average annual % change in GDP from June 2015 to June 2019 per Statistics New Zealand
3. Statistics New Zealand
4. US Bureau of Economic Analysis and UK Office for National Statistics
5. IMF Datamapper
6. Fruition.net.nz
7. Based on NZ 2018 Census Data
8. There is now an additional top tax rate of 39% for income over NZ$ 180,000
9. It was perhaps fortunate for NZ that the second variety of politicians, led by the very capable Jacinda Ardern, was in power when Covid struck. The opposition parties appear far less organised to lead a government.
10. Jacinda remains by far the most popular with David Seymour, leader of the Act party, preferred PM for 16% of those survey, seven percentage points ahead of National Party leader Judith Collins.
11. fao.org