2020s Inflation – Not Such Happy Days

The conflicts of inflation prognosticators

Most economists work for financial firms whose interests’ are served if markets expect low interest rates. Perhaps for this reason these folk have tended to opine, incorrectly, that inflation would not become an issue. Since farmland is likely to significantly out-perform in times of inflation (www.craigmore.com/commentaries/the-return-of-the-land/) I have the opposite incentive. I am conflicted when I predict inflation, since this may prompt investors to allocate to Craigmore’s farming and forestry partnerships. My readers will need to be the judges whether my inflation forecasts of 20201 and hereunder turn out to be as inaccurate as those of mainstream economists.

Inflation factors in the ‘70s vs now

When researching this piece, I was shocked to discover how comparatively poor current US policy settings are relative to the supposedly mis-managed 1970s. Other countries are similar, but I focus on the US as the most important economy. Also, since the US Federal Reserve became “global lender of all resorts”,2 it has become a key input to performance of other economies.

The table below shows that six key inflation factors are now worse (red) and only two factors (green) are better than they were in the ‘70s.

Those factors ranking more poorly now than in the ‘70s are:

In the three years to 2022, there will be average US government deficits of over 10% of GDP compared to an average of 2.1% in the ‘70s. While the Congressional Budget Office (CBO) estimates that the US deficit will be around 5% for the remainder of the decade, this is still twice the level of the 1970s.

How are Government Deficits Financed?

In 2020 and 2021 the US financed its government deficits by central bank money printing – rapidly expanding the Federal Reserve balance sheet (graph below). In the 1970s the US government financed its deficits the old-fashioned way – by issuing bonds to investors so there was no net increase in core money. While the quantitative tightening that began this year is in fact “un-printing” some of the Fed’s balance sheet, a large genie still needs to be put back in the bottle.

Does this leverage create an inflationary policy bias? Might high levels of debt lead the Fed and other central banks to keep interest rates lower than they should? Allowing inflation to run higher for longer to avoid debt defaults and to avoid ballooning US government deficit?

Although both decades faced supply shocks, the massive government and monetary support of 2020 and 2021 prevented business failures and unemployment. As a result, there is now no slack in the major economies. The energy shocks of the 1970s and a series of recessions led to corporate failures and unemployment, which averaged 8% between 1974-79. While politically attractive, the absence of corporate failures is contributing to a zombification of supply, reducing its ability to catch up with demand.3

The two factors that are less inflationary now than in the 1970s are:

The Velocity of Money

In the 70s velocity of money averaged 1.8. Markets re-cycled each dollar of money supply into one dollar and eighty cents of GDP. Velocity has now fallen to 1.1.

The US and other economies are more “open” now than they were in the ‘70s. Inflationary policies at home can be exported to other countries (hence wage growth in China has averaged 11% from 2010 to 2022).

However these two areas, velocity and globalisation, are not get out of jail cards for US inflation. Each could reverse. The velocity of circulation of money could rise as savers become concerned about deposits being inflated away and purchase real assets, thereby re-cycling money balances more rapidly around economies. Internationally, political, logistical and military issues are challenging globalisation. Re-shoring of work (we are seeing this in in agriculture) is heightening shortages of labour.

How hard will it be to shift policy to get inflation under control?

Paul Volker, when Chair of the US Federal Reserve, proved in the 4 years from 1979 to 1983 that tough monetary control can reduce inflation. But he had to raise interest rates to 18%, shortly after which inflation peaked at 14.5%. Unemployment then began a three-year rise, from 6% in 1980 to a peak of 11% in 1983, during which period he held his nerve, keeping interest rates 4% above the rate of inflation, i.e., in real terms about 8% higher than our present policy settings (see graph). 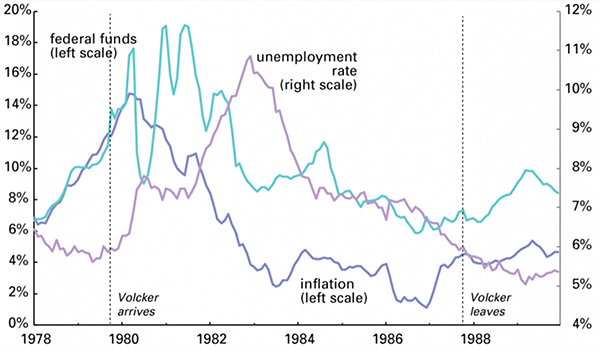 Once inflation is reverberating around an economy it can take a lot to quell it. Input and labour costs put pressure on corporate margins, corporates respond by raising prices. The resulting inflation is then a merry-go-round, which is hard to get off. This is especially true if, as at present, employment markets are tight, markets for goods and service are under-supplied, corporate power has become concentrated and monetary conditions are lax.

Larry Summers was quoted in the FT on 4th August explaining that we’d need a reasonably deep recession to quell inflation now (keeping in mind US unemployment is currently 3.5%). He said:

Conclusion: What is likely to happen next?

I remained unconvinced 4 that central banks are ready to take the tough decisions Larry Summers talks about, i.e. to raise rates to above the rate of inflation and drive recessionary conditions, and/or allow unemployment to rise toward 10%.

Although prices will be volatile, and just like in the 70s, inflation will stop and start, over the coming decade I believe there is a high chance (70%) of ongoing elevated inflation (averaging over 4% p.a.). In the matrix below this would express itself as an inflationary boom in periods we don’t fall into recession and otherwise stagflation. I think stagflation, at 40%, may be the more frequent outcome. However don’t rule out some periods of inflationary boom. Which characterised a number of the stop-start fluctuations of the 1970s. We have already had two years of inflationary boom. In 2021 and 2022.

The scariest scenario is a debt deflation (20%). This would see widespread debt defaults and consequent fall in prices of assets. The central point of this Commentary is this scenario is so unattractive it is likely to drive an inflationary bias in economic policies.