The hegemony of Managerial Capitalism now seems to be unravelling.

The attractions of managerial capitalism:

When I attended business school 20 years ago we were advised to get jobs at marketing firms with dominant market positions (Procter and Gamble was a particularly favoured destination). We were urged to avoid, at all costs, commodity industries.

For most of the period from 1900-2000 this was good advice. What we viewed as “excess competition” in resource sectors meant commodity industries normally “came last”. This was true in recession (e.g. 1989-91) when commodity prices fell more than other prices, and in the 90’s boom, when commodities rose but house prices, stocks, dot com companies etc rose faster.  Generally, over the “managerial capitalist” period of history, the large-company corporate sectors of the economy were much more generous places to work (and invest) than the “low margin” commodity industries*.

Resource sectors of the economy generated no surplus:

Resources, during this period, were chronically over-supplied. As a result they priced themselves “at cost”. The “iron laws of economics” mean that industries with chronic over-production and no market discipline (free competition so no ability to artificially manufacture a shortage to drive up prices) cannot obtain much more than “cost” (including cost of capital) for their services.

The developed world farming sector, to illustrate, which 400 years ago absorbed perhaps 50% of incomes, saw its share begin to fall in the 18th and 19th centuries.  Discovery of abundant land in the New World, plus innovation in farming and transport systems gradually increased supply of food commodities. This increase in supply (and surplus resources enabling the economy to develop many new activities) pushed down farmers’ share to perhaps 10% of developed country incomes by the 1920’s. More was to come. Scientific advances enabled world agriculture to at least double its production per hectare during the “green revolution”. Yet, since humans can only eat around 3,000 calories per day whether the food is cheap or expensive, and the increased food supply was, at the margin, only available to populations in (then far fewer) globalised economies, this created farm commodity surpluses that simply could not be consumed (e.g. butter mountains). As a result food commodities’ share of developed country average incomes fell to as low as 1% of developed country incomes by the year 2000**.

Thus, it seems, agriculture’s reward for making itself mightily productive was an extraordinary loss of its share of economic wealth. Other commodity industries (although none perhaps quite as dramatically as agriculture) suffered similar fates.

Managerial Capitalism seemed as though it WAS the economy

Cheap resources and innovation drove growth: and the fruits of this were gathered up by the organised parts of the economy. These other sectors of the economy, floating on a sea of cheap and abundant resource, were able to expand, and to organise themselves to capture the surplus wealth in the economy. After a period to the 1970’s when organised labour seemed to be capturing an increasing share of income, the baton was passed to the managerial capitalists. These fine fellows organised like mad to capture most of the available rents or surplus in the economy for the manufacturing and service sectors*.

But the hegemony of Managerial Capitalism now seems to be unravelling:

Since 2000, this happy state of affairs (for urban consumers and for corporate moguls) has been unravelling. Procter and Gamble itself lost momentum and was forced to undergo a major restructuring completed in 2005. Many other product marketing firms, including the “daddies” of managerial capitalism, General Motors and General Electric, either went bankrupt or at least had to be restructured/re-oriented. Big pharma profit growth ended it’s innovation-inspired run. The telecom bubble burst for virtually all the players in that racket. Many food and media giants tripped (Woolworths, Ahold, Walmart, Tesco, EMI, Time-Warner). Even Microsoft has started to lose hegemony. The finance industry exploded in the most spectacular crash of all.

If you seek quantification look at the MSCI World Index. It has hardly moved over the last 10 years (+2.5% annual growth, while the US GDP deflator has grown by 2.3% per year over the period). Meanwhile the MSCI Materials stocks rallied by 145% (+9.4% per year) over the same period.

In other words, while the corporate and financial sectors ceased to create new value, the commodity sector experienced it’s best return for generations.

What drove this reversal of fortunes?

It seems to me the very success of the modern product marketing firms (the managerial capitalists) in encouraging the globalisation of western life-styles so massively increased consumption that the “lump of commodities” has now been absorbed.

The total population grew by 1 bn in the in the past 20 years or so. And the life-style proportions were approximately reversed. 4 or 5 bn citizens of the planet now at least aspire to western lifestyles (protein in their diet, access to electronic information, a monetised income), while 3 or 2 bn continue to live less elaborate lifestyles.

Agriculture had once ruined itself by being too efficient. Similarly the manufacturing and service sectors have now absorbed the resource glut that fuelled their good years by spreading consumerism to the corners of the globe. And thereby de-stabilising their hegemony.

Resources are once again a binding constraint on the economy, and are beginning to earn “rents” i.e. meaningful profits for their owners.

Has this process got further to run?

The markets in energy and metals have already risen significantly (the oil price by 500% in 10 years).  Those for food commodities have risen by perhaps 100% to 150%. I regard food commodity markets, other than in isolated areas, as not yet in shortage, rather just moving out of the era of chronic over-supply into a more balanced equilibrium. E.g.  inventories of 150 days of global rice consumption sat on the market in 2000 (ILO/FAO). This had fallen to 75 days by 2008. By no means a disaster, but  nevertheless a significant tightening of supply and associated with a rise in prices.

What about future growth in agricultural yields?

The gains from agricultural science (including those from GMO’s in those parts of the globe that have allowed these) are now largely played out. The FAO estimate crop yields can only increase by 1% to 1.5% per annum in future.

Protein demand is driving up demand for farmers’ outputs

Significant increases in demand for the produce of land are underway and look likely to continue. The principal driver of this is the spread of protein consumption to Asia. Protein calories can take 10 times as much land area (and fertiliser, water etc) to produce as carbohydrate calories. This trend is the principal reason food inventories are likely to get tighter.

I expect real prices of food commodities to continue to rise. However there will be periods of volatility around shorter term issues such as the quantity of grains diverted to bio-ethanol (this may have peaked) and the continued “bringing into production” of under-utilised lands in Eastern Europe and Latin America.

The cost of the wheat in an average loaf of bread is only 5% of the price of the bread in the shops:

To estimate how far food commodity prices could rise let’s look at the price of bread: Wheat used to cost EUR 80 per tonne. It has risen, over 10 years, to EUR 200 per tonne. Each kg of wheat therefore costs 20 cents. Each kg of bread can produce 2.5 loaves of bread. Thus the “wheat commodity” element of a loaf of bread (priced in the shop at EUR 1.6) is under 5 percent of the final product price. Wheat prices could double and, other things equal, bread would rise in value to EUR 1.68 per loaf. It could double again and lift the price to around EUR 1.76. Clearly this analysis is simplistic and naive. However it does illustrate that, despite recovery from a depressed state, the farming industry could re-rate its share of income a lot further before volume of demand would be much affected. 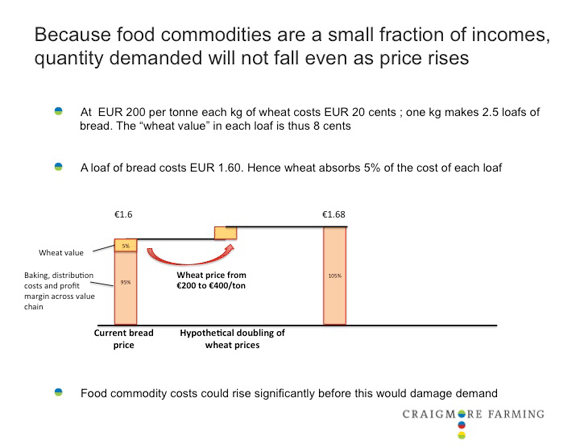 It seemed for the period from 1950 to 2000 that the product marketing parts of the economy had exempted themselves from the former “iron laws” of supply and demand. It appeared they had found ways to permanently enjoy a large share of the excess rents of the economy.

Yet what really happened was a period of gains in supply of commodities – greatly privileged this sole well-organised sector of the economy (the only sector in a position to cartelise returns***) and allowed the big manufacturing and service companies to capture most surplus rents. In future over-looked resource sectors especially agriculture are likely to “take back” an increasing proportion of the surplus rents in the world economy.

Predicting a further significant increase in farm revenues as a share of average income:

I believe that farmers’ shares of developed country real incomes could grow from currently 1% to  2% to exceed 5% or perhaps even a greater share of incomes. There is a need for agriculture to produce more outputs. Producing more food, and converting marginal lands to food production will require higher prices. As Jim Rogers of Rogers Holdings likes to say, “the solution to high prices is high prices”.

We have already, in the last few years, seen significant profits being earned by farmers and significant rents flowing to landowners. It seems likely this trend will continue, albeit (since these remain commodity markets) with significant volatility along the way.

* Alfred Chandler’s “The Visible Hand”  magisterially shows how US managerial capitalism went to prominence extremely fast, with around 40% of the US population working in the large company sector in the 1950’s, while these large companies managed to accumulate most of the excess returns (profits and excess rents paid via above-market salaries) available. As we know, this evolved over time from benefiting the large companies’ employees to shareholders subsequently.

*** The large companies that manoeuvre to dominate markets will not (normally) go so far as to illegally fix prices. Instead they generally avoid competing on price and instead seek to differentiate themselves using innovation and product enhancement. Sometimes however these implicit understandings spill over into explicit price fixing. A sad example of this (for the UK farmer) is the UK Supermarkets’ repeated fixing of the wholesale prices they pay farmers for milk. A number of criminal convictions and plea bargains (e.g. a GBP26 mm fine levied on Sainsbury’s in 2007) have not improved the fate of the UK farmer who, despite better proximity to market, receives systematically less than New Zealand farmers for his or her milk.

One interesting reason for this difference is that New Zealand Dairy Farmers, taking a leaf out of the MBAs’ book, own a Co-operative called Fonterra which controls between 35% and 40% of the international trade in dairy products. Fonterra is AA rated, has revenues of $18 billion per year, and is Nestle’s biggest supplier. The NZ Dairy Farmers (alongside resource investing firms like BHP and Potash Corp which are moving to horizontally dominate their sectors) are reinterpreting the lessons of managerial capitalism for the 21st Century resource constrained world.