In this environment New Zealand land represents a low-beta, cash generating, inflation-proof investment. A “real bond”. An interesting time to revisit the old joke about buying land in New Zealand (and gold!) in times of turmoil.

In this month’s Commentary I explore how NZ Farming and Forestry investments are exposed to the current economic climate. We will look at market pricing of the NZ dollar, of food commodities, of land, and of timber.

Thank you to those who have indicated interest in the current fund-raisings for the Craigmore Farming and Forestry Funds. We will continue taking indications of interest until end August. We then aim to finalise diligence and subscriptions in September. We expect to raise a minimum of a net NZ$25 mm in this round. Total capital across the two Funds should total over NZ$50 mm once we finalise the Rounds. Hopefully a touch more.

The NZ dollar is now trading at 71 against its trade-weighted index – down from a recent high of 76 as the currency sold off from its peak valuations of a month ago. As you can see from the graph a level around 71 is about 5% above its average rate of 68 versus its trading partners since 2003. 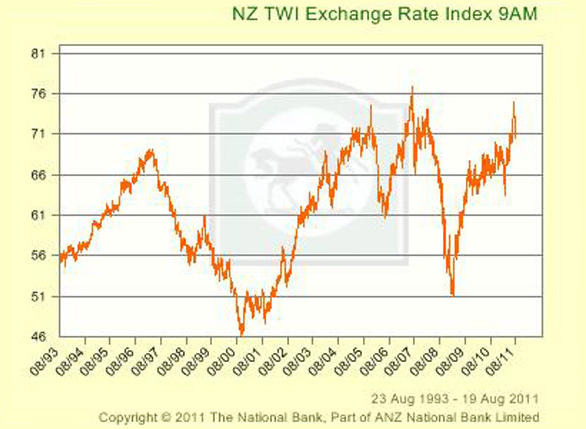 Where does the Kiwi go from here? Well, we would not expect to witness again the cheapness of the NZ dollar prior to 2003. Why? Two reasons: First, prices of NZ’s exports of food commodities rose strongly from 2000. Global food commodity markets gradually switched from chronic over-supply to the shortages they now face for the foreseeable future. Secondly New Zealand generated much better macro-economic data. In particular NZ ran a fiscal surplus during most of the past 10 years – bringing government debt down to 30% of GDP.

Meanwhile the balance of payments of New Zealand have been improving strongly (see graph below). In other words strong food commodity prices (up strongly, particularly in the past two years) have out-performed the currency (up, but not as much). 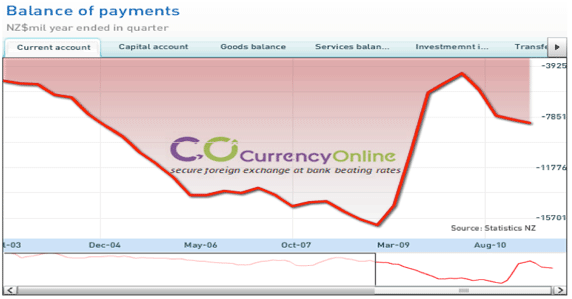 New Zealand has good growth rates and favourable demographics. It does not have any prospect of quantitative easing. Indeed prospects are for monetary tightening in the next six months to off-set the effects of strong demand for its exports.

In summary NZ has gradually been transformed from a low-savings, high balance of payments deficit country into something more respectable. Although knee jerk reactions against commodity currencies may carry it lower in periods of crisis (we hope they do, we have a lot of NZ dollars to buy!) it is not clear that this currency will be sold by investors transferring out of the kiwi and into “safe havens” in the months to come. In fact, given quantitative easing of other main currencies, even the Swiss Franc, it is not clear that the currencies of New Zealand, Norway and Canada and to a lesser extend Australia (lesser given Australia’s exposure to more cyclical “industrial” commodities) may not become the new safe havens.

We expect some further weakness of the Kiwi on recession fears and re-pricing of the commodity complex, but regard this as a buying opportunity, as the Kiwi dollar is less exposed to a global recession than most currencies. As noted in previous Craigmore Newsletters NZ’s exports fell by 1% in 2008, while those of Germany and China each fell by 9%.

Mineral and energy commodities have sold off strongly in recent months. The prices of food commodities have also softened, but by less, being in relatively short supply and less cyclical (see graph). 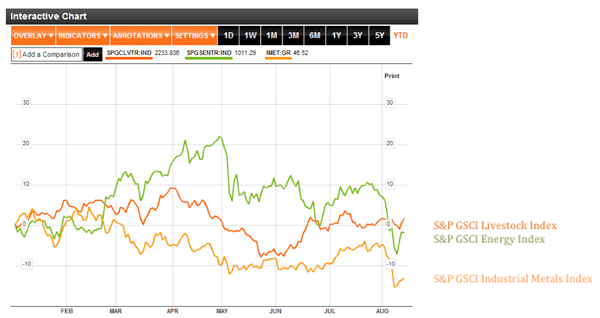 Craigmore aims to continue to buy as much land as possible at present levels of 20-30% discounts to peak valuations. As per previous commentaries we do not know how long this window of opportunity will be open. In the USA Mid-West land prices are reported to be up 30% to 40% in the past 12 months. We expect that NZ land prices will also move sharply higher once the present over-hang of over-leveraged farmers is cleared.

I continue to find this investment opportunity one of the most compelling of my career. I am continuing to progressively liquidate my family trust’s securities portfolio (all hedged into gold so not a position one finds easy to sell) to contribute to the present Craigmore Fund-raisings.

Given the strong NZ dollar and some seasonal softness in Chinese demand export timber prices have also softened slightly in the past three months – re-tracing some of 2011’s year-to-date gains (see graph). The strong gains we saw in 2010 remain intact and Chinese demand is now picking up again.

The Craigmore Forestry Fund has a relatively young estate so land valuations are a bigger driver of returns than timber prices right now. Since most Fund land was acquired at 40% discounts to peak valuations, and the North Island hill country land market is up 20% in the past year, this effect – of the re-pricing of a portfolio of well-bought land – should dominate any medium term commodity weakness.

Please email or call with any questions.