Don’t Fight the RBNZ (in a currency war)

So what is the monetary stance of the RBNZ at present, and what might this mean for NZ farmland prices going forward?

The market lore “don’t fight the Fed” refers to the power of US monetary authorities to shift asset markets, even against prevailing sentiment. In New Zealand, also, the path of asset prices is impacted by how the Reserve Bank of New Zealand responds to its challenges, not least the potentially strong NZ Dollar.

In this Commentary I argue that circumstances may lead the NZ central bank to further lower interest rates. And that this would be positive for NZ farmland returns in coming years.

To understand why this is likely, we we need to consider five definitive periods of NZ financial history:

In the 1960’s NZ had amongst the highest per capita income in the OECD, along with Switzerland. Three million people owned agricultural land that could feed 100 million and they specialised in high value protein products that cost relatively little to transport to the other side of the world. Relative to its value, transport of meat or dairy typically costs no more than 3% of their market price. In this happy period NZ could easily “live off the sheep’s back”.

In 1973 the oil shock, imposition of quota barriers with the UK joining the EEC, and a thirty year period of global protein over-production as a result of the green revolution, forced NZ onto a tough downward economic pathway. NZ GDP per capita dropped from ranking third in the OECD to 20th by 2000, below Singapore and Hong Kong (Source: OECD, PWT).

2. The Activist Economics period of the 1970s – NZ agricultural subsidies

Faced by this deterioration in NZ’s trading position the New Zealand Government, advised by well-meaning “activist economists”* with Keynesian ideas, attempted to soften the blow with interventionist economic policies and deficit spending. NZ placed capital controls on financial markets (interest rates and foreign exchange rates were fixed) and we attempted to “pull ourselves up by our boot-laces” by subsidising our largest industry – agriculture. Debts owed by the NZ government rose to around 70% of GDP (any of this sound familiar?).

*  despite coming across as innocuous tweed-wearing academics these persons are a far greater long term threat to financial and economic stability than any Bernie Madoff – see Craigmore commentary on these dangerous characters (View online “The End of the Twentieth Century, Craigmore Commentary, November, 2011“)

Refinancing strains made it clear by the early 1980’s that “the most socialist economy in the OECD” could not go on as it was. NZ would either have to restructure its debts (“the Argentine solution”) or find some new economic policies. A number of NZ leaders successfully advocated the second alternative. These included the then leadership of the Labour Party, and also my father, Sir Peter Elworthy, leader of NZ Federated Farmers from 1983 to 1989.  As a result, NZ underwent a series of free market reforms and privatisations. The farmers agreed to give up farm subsidies in return for the floating of the currency and interest rates, and reduction of tariffs on imported machinery and fertiliser. By 2000, NZ had abolished all forms of agricultural subsidy and become arguably the most free market country in the OECD.

It was not easy and it took fifteen years of austerity and successive waves of restructurings and privatisations to turn the economy around. The lessons from the pain of this period remain present in NZ minds. Proponents of non-cyclical deficit spending are correctly understood to be storing up problems for the future.

During the period up until 2008-2009 the RBNZ developed a very different approach to monetary management than many of its peers. When the NZ central bank saw property speculation in both urban and rural property markets it raised real short term interest rates for prime borrowers, such as Craigmore, to over 10%. In a period when NZ CPI inflation was not above 2.5% on average.

This had a very marked effect on both the rural and commercial property market (see graph of farmland prices below). 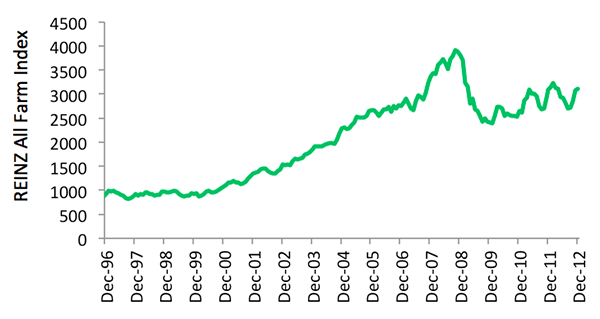 Having slain the asset-price inflation dragon with an aggressive interest rate policy that few other governments had the courage to do, the RBNZ faced a new set of problems after 2009. NZ export commodity prices have been strong, and may become stronger, while unemployment is low at 6.5%. The NZ Dollar, because it is one of the only developed country currencies with non-negative government bond interest rates (see graph below), is beginning to get a reputation as one of the few “hard currencies” out there.

The NZ population, given its history, will not look favourably upon politicians or central bankers who engage in deficit spending or who print money.  This is first rate thinking in my opinion, but it has the consequence that NZ risks being a victim of its virtuous policies. Most other major countries (US, UK, China, Japan, Germany, Switzerland) are either fixing their currencies, or actively printing them through government sponsorship of the credit markets, or both (see graph of Japanese money printing and impact on its currency, below).

Evolution of USD/JPY Exchange Rate Along with BOJ Monetary Easing

Given this “corruption” of the main world currencies there is a risk that the NZ Dollar (and Australian Dollar and Norwegian Krone) trades into the position that the Swiss Franc used to occupy before the Swiss gave up and committed to print as much as necessary to keep in parity with the euro. This risk is that refuge buying of the currency propels it artificially high, damaging the NZ real economy. So far, this has not occurred, and the NZ Dollar has tracked the country’s terms of trade (see graph below).

Long Term Evolution of NZ Terms of Trade and NZD/USD 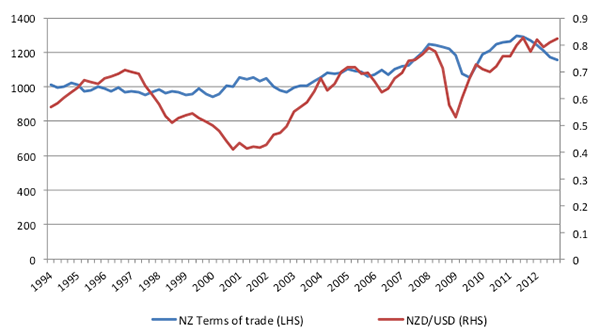 Nevertheless, now they have developed a taste for it, money printing by other countries is unlikely to cease. It will only cease when these countries succeed in imposing their own austerities (and there is little appetite for that), or their currencies actually collapse and have to be made hard, imposing a dramatic and immediate austerity. Such an event is hopefully some way off. Therefore refuge buying of the kiwi dollar by investors seeking to avoid soft currencies remains a threat. The new Governor of the Reserve Bank of NZ, Graeme Wheeler (a former World Bank Managing Director with useful experience of crises elsewhere) has a conundrum. His population do not want to hear about fixed currencies and money printing. Yet he risks, with current policy settings, weakening large parts of the NZ economy and employment base. And gifting these jobs to countries who are “cheating” on the system.

6. A monetary pump for farmland returns?

It seems clear to me, given the above problem and also the NZ political base which precludes quantitative easing in NZ**, that Governor Wheeler has only one policy alternative to follow. He must lower interest rates in NZ to very low levels, so that “hot money” is no longer attracted to NZ by high interest rates. And he must employ non-quantitative measures (principally bank reserve ratios) to ensure that this monetary easing does not fuel another asset price bubble.
** only the Greens are advocating it and, while growing, they remain a minority party

If this is correct then we should expect to see interest rates falling, but bank lending becoming difficult to obtain for all but the best counterparties.

On balance I would see this situation being positive for land prices. A currency that is not rising or at least not appreciating too fast will see good commodity returns flowing through to the farms. Lower interest rates may be positive for land prices. I was living in the UK during the period mortgage interest rates fell from around 8% to around 4% and this factor alone approximately doubled house and other real estate, including farm prices, because all these real assets became more affordable. Although the quantums may be different, I don’t see why lower interest rates as they become available to farmers (and they are – five years ago NZ farmers were paying 10% interest – this has recently fallen to 5%) will not have similar effects in NZ.

There is a counter-argument that lack of bank lending will prevent farmers leveraging up and chasing land prices higher. This is possible. If this occurs it would imply that some terrific investment opportunities will (continue to) be available for investors that are fortunate enough to be bringing true long term equity capital into NZ farming.