The USA is the world’s largest producer of maize and soy, and the third largest of wheat. As a tough 2012 summer drought is impacting crop yields, we are set to observe a global decline in food supplies.

However, its impact on U.S. farmers will not be universally negative. A sharp increase in crop prices may compensate for the reduced harvest now expected this year. It appears even regions whose production has been hit are going to, on average, beat budget this year as commodity prices have lifted significantly more than the fall in (average) production.

It’s well known that farmers are unhappy no matter whether it rains or is dry. They always have something to moan about. Has this changed? Can farmers be happy when it rains, yet remain content when it is dry? 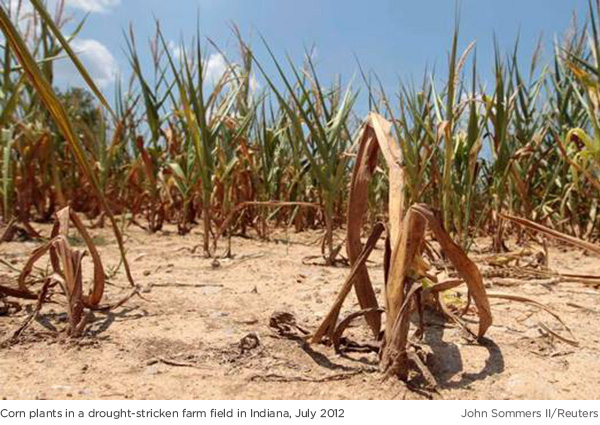 The U.S. isn’t alone, Russia is also experiencing severe drought. On 10th August SovEcon estimated that Russia may harvest less wheat than in 2010 when the country had the worst drought in at least 50 years and banned exports. Compared to pre-drought estimates, the fall in Russian wheat production may be as high as 20% (USDA).

Grain stocks were already low due to droughts in 2007 and 2010. World inventories of 4 months of grain consumption in 1982 had fallen to 2 months of grain production 20 years later (see chart- prepared before the current drought). The IGC estimates the drought will cause grain stocks to fall sharply further – by around 8%. 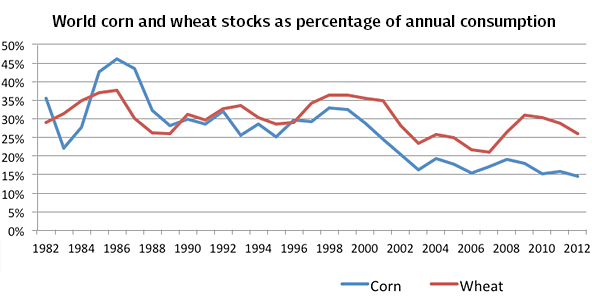 Why, with world grain supply volumes down only about 4% from forecast, have prices risen 35%?

Food demand is remarkably inelastic. Almost the same volume of food will be consumed whether the price is high or low. People‘s food consumption decisions (and government ethanol requirements) will be only mildly reduced (if at all) as the price of grain rises.

Yet, in a year like 2012, not everyone can consume as much as they wish, since there is less grain. The price of grain needs to rise a lot in order to reduce the demand. Given that food commodities presently absorb under 1% of average US incomes, it will difficult to find such behaviour in the US itself (without lifting the price a very great deal).

Looking at the current reaction of the price of grain to the drop in supply, the figures seem to imply that, in the short term, a 1% change in world supply of grains forces an over 8% change in the price.

What’s the impact of these volume and price changes on farmers’ profitability?

For U.S. farmers we calculate the net effect of the drought may be on average slightly positive.

The micro-picture is obviously more complicated. On the downside, some farmers have been much more badly affected than others. For them the drought is, no doubt, a major challenge. Also, some farmers with reasonable crops will not receive these higher prices, as they hedged by selling forward their production. On the upside, the government supported crop insurance compensation that some farmers will receive will bolster incomes.

Meanwhile, for (un-hedged) farmers not impacted by the drought there will be an unambiguous surge in profitability. For example, an irrigated farmer with reliable water should benefit from the entire price increase i.e. 35% more revenues this year.

The grumpy farmer of last Century, come rain or shine.

In wet, highly productive years farmers would have more grain and meat to sell, and would need to accept lower prices (often be barely above their marginal costs of production) in order to clear the inventory. In dry years, although prices might be better on lower supply, volumes of production would be lower. Returns were low in those years also.

It may be that during this period, farming developed its reputation as a low return, difficult business managed by grumpy people.

Are farmers likely to be happier in the present Century?

Farming is now being transformed. The “middle class” population of the world, who seek to include foods like beef in their diets, is in the process of growing from 1.5 billion to over 5 billion. Chinese demand (chart below) for dairy and meat is rising fast, and this will continue as China rebalances from an investment-led to a consumption-led economy. 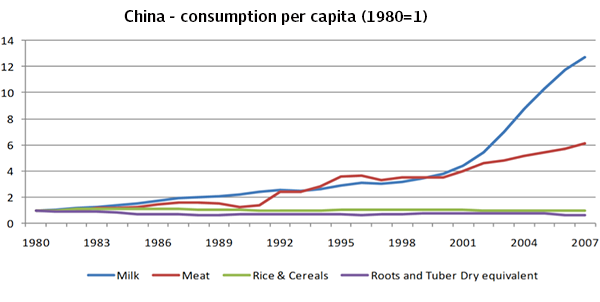 According to Jeremy Grantham (in the FT on 14th August) a pound of beef requires 30 pounds of grain for its production, and one pound of pork requires 12 pounds of soya.

This trend to “land expensive” protein consumption, plus population growth, and increasing climatic variability are tightening agricultural commodity markets. Actual shortages of food are a looming possibility given slowing productivity growth (despite high prices). Also it appears limited new land will come on stream. The OECD-FAO estimate arable land is only expected to increase by 5% by 2050 – by which time the population will have grown by 22% to 9 billion.

In future, farmers are set to do very well in ‘normally’ productive years as prices are bid up by these demographics.

Ironically, apart from those in the worst affected areas, they may do even better when the farming industry as a whole has poor years, driving up prices in the face of steeply inelastic demand.

This potential (for high profits) is particularly the case for farming assets acquired in regions with reliable rainfalls and soils. Or, better still, for farmers who are able to radically reduce production volatility (as well as lifting yields) by use of irrigation.

Are farmers about to become happier? Who knows! It remains an operationally challenging business, and hard work. However a lot of the farmers we know have stopped complaining as much as they used to!

We still have a couple of places left on our New Zealand Farming Field Trip taking place on the 1st and 2nd October this year. Please contact me at forbes.elworthy@craigmore.com if you would like to attend this or one of our future trips.